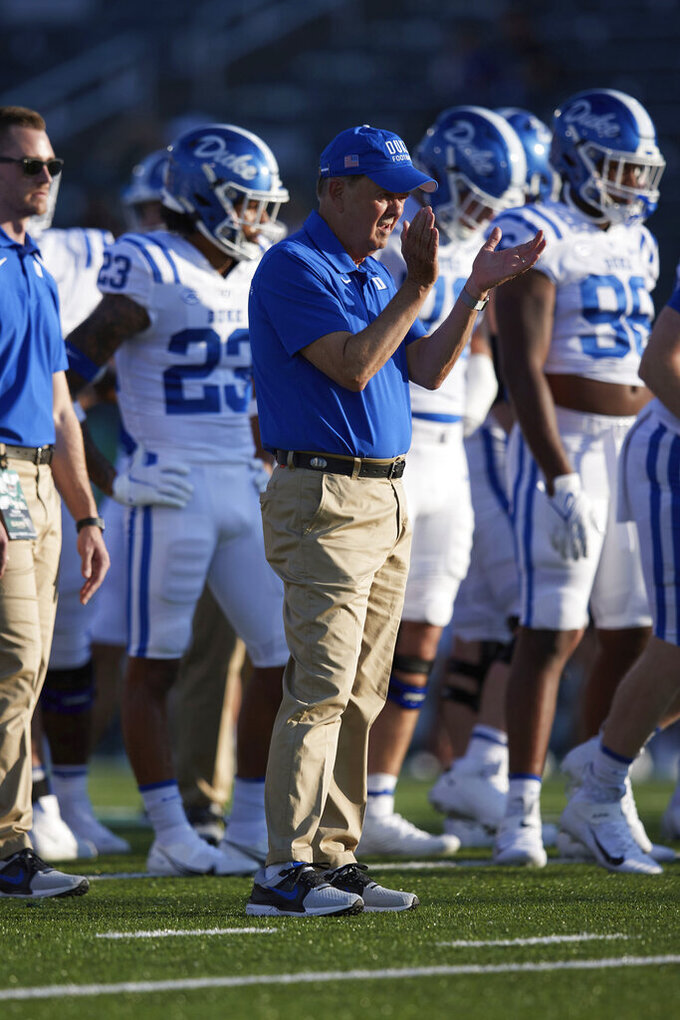 Duke coach David Cutcliffe is pushing his team to improve its execution on the handful of moments to seize control of a close game.

The Blue Devils host North Carolina A&T on Friday night after losing at Charlotte in the opening week on a final-minute touchdown. And Cutcliffe had no trouble zeroing in on those sequences that decided the outcome.

“What I’m looking at are opportunities that the head football coach has to have a team better prepared for, and I mean that whole-heartedly,” Cutcliffe said. “I think we can have a good football team. You can’t think it though, you have to be one.”

The Blue Devils (0-1) squandered a program-record rushing day from Mataeo Durant and surrendered the go-ahead touchdown with 33 seconds left in the 31-28 loss to a team that had never beaten a power-conference program.

Digging deeper, Cutcliffe pointed to the 49ers gaining 218 yards on six plays. And there was also the goal-line fumble on a keeper from first-time starting quarterback Gunnar Holmberg.

“You have to seize those moments,” Cutcliffe said. “Some of them were where we could’ve gotten off the field. Offensively the opportunities to score points were there throughout the game and we didn’t take advantage of those opportunities.”

The Aggies (0-1) are coming off a road loss at Furman in the Big South Conference program’s first game since December 2019 due to the cancellation of the 2020 season due to the COVID-19 pandemic.

North Carolina A&T had a mistake-filled performance with two turnovers, one coming at the Furman goal line, and 10 penalties for 105 yards.

“I give you my word we’ll be better prepared this upcoming week,” Aggies coach Sam Washington said.

Some other things to know about Friday’s North Carolina A&T-Duke game:

Durant split work last year with Deon Jackson but had no trouble carrying the load alone.

The senior ran 29 times for a Duke single-game record 255 yards with three touchdowns, including a 53-yard sprint that gave the Blue Devils a late lead.

Backup Jordan Waters also had a 43-yard touchdown catch from Holmberg and ran for 65 yards on five carries, though Cutcliffe said the Blue Devils will need to keep Durant fresh.

“I do think we have an element in that running back room that we’ll see more people and we can rest Mataeo some,” he said. “We need Mataeo obviously to be great in the fourth quarter.”

Washington said the Aggies’ top defensive linemen are expected to play in this one after missing the opener. The school didn’t specify exactly why ends Devin Harrell and Jermaine McDaniel, along with Michael Branch and Karfa Kaba on the interior, were out for the Furman game.

The opener marked Duke starting center Jack Wohlabaugh’s return after missing last season with an injury to his right knee. The redshirt senior played 76 snaps against Charlotte and said he felt some soreness after the game.

“It has ups and downs, but I was really pleased with how I felt during the game,” he said.

Duke was the only team in the Atlantic Coast Conference that opened the year without a quarterback with starting experience. Holmberg completed 20 of 29 passes in his first start for 228 yards in a generally smooth passing performance, though his goal-line fumble proved to be the difference.

The Aggies and Blue Devils have met once before, with Duke taking a 45-13 home win in the 2019 season.