Ex-Clemson star Kelly Bryant takes over at QB for Missouri 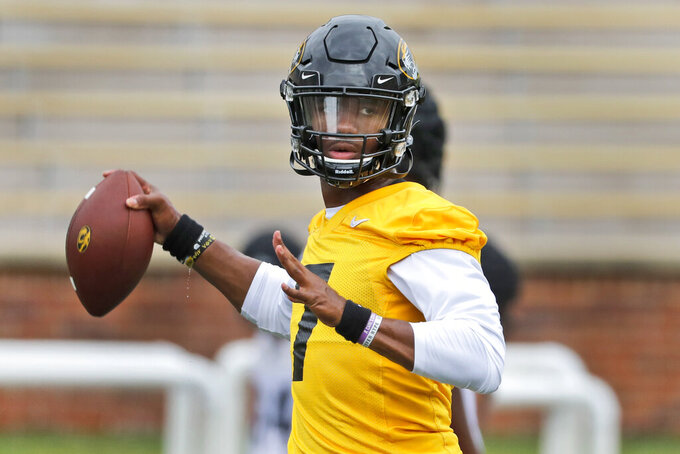 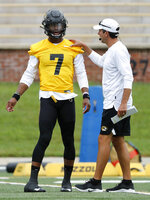 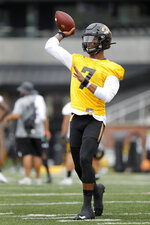 COLUMBIA, Mo. (AP) — Barry Odom never seems stressed about the future, whether the Missouri coach is pondering tough sanctions handed down by the NCAA over a recruiting scandal or the fact that one of the most prolific passers in school history is now in the NFL.

When it comes to the punishments, Odom knew that outside of an appeal there was little he could do.

When it came to the quarterback situation, he knew Kelly Bryant was in the fold.

The graduate transfer from Clemson is expected to seamlessly take over for Drew Lock under center this season. Bryant backed up Deshaun Watson for two seasons with the Tigers, then led them to the 2017 national championship game before losing his job to Trevor Lawrence after four games last season.

His saving grace was a change to NCAA guidelines that allowed Bryant, who started four games as a senior, to retain a full year of eligibility. And he decided that year would be spent in Columbia.

"The ceiling is high for this group," Bryant insisted. "We just have to take it one day at a time. Don't try to look forward to the season and focus on the right now and what's going on right now."

Still, the responsibility Bryant inherited is a massive one.

Lock started 46 games over the course of four seasons, throwing for 12,193 yards and 99 touchdowns while leading the Tigers to bowl games each of the past two years. The only quarterback to throw for more yards and touchdowns at Missouri is Chase Daniel, who has gone on to a long NFL career.

Odom is confident Bryant has the same ability. The only question was whether Missouri could land his commitment when Auburn, Arkansas, Miami and other schools entered the mix.

"When Kelly stepped on campus for his official visit, I saw interaction between him and our team in the locker room. It was a natural fit," Odom said. "He's a very selfless person, low, low ego. And one of the best competitors that I have ever been around."

Bryant also is loyal. He never wavered on his decision, even when the NCAA banned Missouri from the postseason following allegations by a tutor of providing players impermissible help.

The school has been hopeful that an appeal will effectively overturn most of the sanctions.

"The way that the course goes, we'll find out and come to closure with it one way or the other in the near future," Odom said, "and the way I handle that with my team will be just like I have with everything else: very direct, open and honest in where we're going, what the opportunities are and how we're going to move past it."

Odom called Derek Dooley's first season as Missouri's offensive coordinator a success, and not just because of the on-field X's and O's. Odom also appreciated Dooley's work on the recruiting trail and the ability to bounce ideas of the former head coach at Louisiana Tech and Tennessee.

The Tigers have one of the SEC's best wide receivers returning in Johnathon Johnson, who had 59 catches for 737 yards and five touchdowns last season. He capped the season with nine catches for 185 yards and a touchdown against Oklahoma State in his hometown Liberty Bowl in Memphis, Tennessee.

Larry Rountree III ran for 1,216 yards as a sophomore, taking some of the pressure off Lock and giving the Tigers some nice offensive balance. Tyler Badie backs him up, and the complementary running backs should take some of the stress off Bryant early in the season.

The Tigers lost 13 of their first 18 games under Odom, who was hired to replace the retired Gary Pinkel before the 2016 season. But since a 1-5 start in 2007, the Tigers have won 14 of their last 20 games, and they are perfect in the crucial conference month of November the past couple of seasons.

The Tigers open at Wyoming on Aug. 31 before a nonconference showdown against West Virginia the following week. The Tigers also play Southeast Missouri State and Troy along with their SEC schedule, which is highlighted by a trip to Georgia and a home date with Florida.