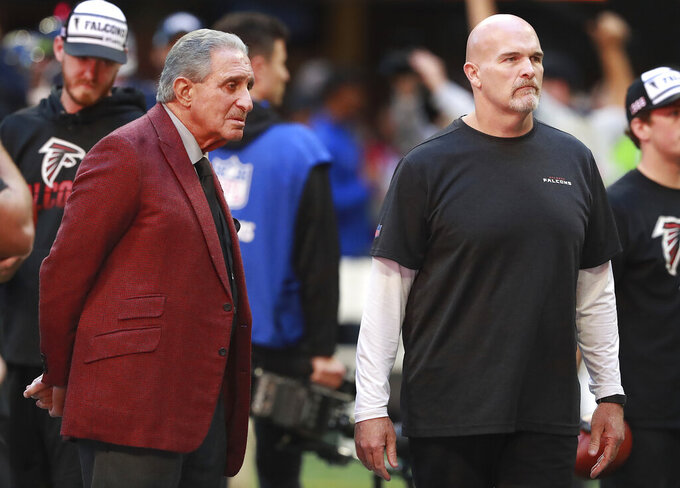 ATLANTA (AP) — Raheem Morris is returning to his roots as a defensive coach.

The Atlanta Falcons hope the move will help save their season.

After 3½ seasons working with the receivers on the offensive side, Morris is now in charge of the struggling secondary.

"You do whatever is required for the team,'" he said. "Put some new eyes and perspective, some technique and fundamentals, some things that we wanted to clean up."

The defense is hardly unfamiliar territory for the 43-year-old coach.

Morris started out as a defensive backs assistant at Cornell. He coached the secondary at Tampa Bay before moving up to become the Buccaneers head coach for three seasons. After getting fired from that job, he spent three more seasons as a defensive backs coach in Washington before assuming that same role with the Falcons when Dan Quinn was hired as head coach in 2015.

In Quinn's second season, he shifted Morris to the offense for the first time, believing he could bring a new perspective to a receiving corps led by Julio Jones — a move that clearly paid dividends on a record-setting offense that helped propel Atlanta to the Super Bowl.

But, with these Falcons (1-7) mired in a six-game losing streak that has raised questions about Quinn's future with the team, the coaching staff got a shake-up during the bye week.

Morris was not surprised when Quinn asked him to move back to defense.

"Whatever I'm required to do, I'm going to jump in and do and be happy about it," Morris said.

Quinn has not yet surrendered the defensive coordinator role that he assumed this season, but he's clearly given up some control in an attempt to turn things around.

"I thought at this point bringing some fresh eyes onto some things would be what was necessary," the head coach said. "It's the right thing to do. I wouldn't have made this big a shift if I didn't think it would make an impact."

Morris takes over a unit that ranks 23rd in the league in passing yards allowed (261.1 per game) and is tied for last with only two interceptions. Second-year cornerback Isaiah Oliver has struggled mightily in his first year as a starter, failing to jam receivers at line and getting lost in coverage far too often. Desmond Trufant, who has been out with a toe injury, could return for Sunday's game at New Orleans. If so, rookie Kendall Sheffield might move over to replace Oliver on the right side.

The pass defense struggles are not entirely the secondary's fault. The Falcons also rank last in the league with just seven sacks.

Morris knows there's only so much an assistant coach can do.

Morris' immediate goal is find ways to create more turnovers. Atlanta is 31st in takeaway margin at minus-11.

"Our team is 100% about the ball," he said. "For whatever reason, we haven't gotten 'em. We've knocked some balls out. We haven't been fortunate enough to get on those balls. Your turnover margin definitely affects your win percentages. We are where we are because of that right now."

Morris' new group faces a stout challenge defending the first-place Saints (7-1). Drew Brees is all healed up, returning to lead a potent offense that has generally had its way with the Falcons over the years.

Improved communication is one element.

"Particularly with our corners, getting them playing with some confidence, getting us playing down on the line of scrimmage," Morris said. "If we can clean up some of the communication ... all speaking the same language and doing the same things as fast as we can do it, as hard as we can do it, while attacking the football, you give yourself a better chance."

By Ralph D. Russo an hour ago
an hour ago
2 hrs ago
3 hrs ago
By John Marshall 3 hrs ago