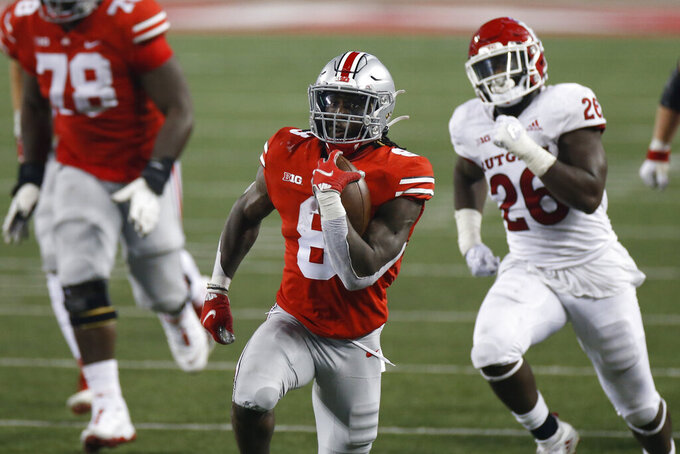 Ohio State running back Trey Sermon runs for a first down against Rutgers during the second half of an NCAA college football game Saturday, Nov. 7, 2020, in Columbus, Ohio. Ohio State won 49-27. (AP Photo/Jay LaPrete)

COLUMBUS, Ohio (AP) — Justin Fields threw five touchdown passes, and No. 3 Ohio State won a Big Ten game on Saturday night. But it was hard to tell from the postgame demeanor of coach Ryan Day and some of his players.

The Buckeyes charged out to a 35-3 halftime lead over Rutgers, a five-touchdown underdog. But mistakes, sloppiness and a few trick plays allowed the Scarlet Knights to put up 24 second-half points and get a little too close for Day’s comfort. Ohio State (3-0 Big Ten) won 49-27, but things didn't go as well as planned.

“Not to make excuses for our guys but one of the things that’s real is you go up 35-3, it’s whatever time it is, 8:30 or 9 o’clock on a Saturday night, (and) the stadium's empty,” Day said. “No juice in the stadium, and so we have to do that, we have to bring our own energy in. That's a challenge for us that we’ve got to do. And it’s something that we’re going to really address this week and talk about."

Fields had another great day. In addition to the five touchdown passes, he ran for another score. A Heisman Trophy finalist in 2019, he added to his already gaudy 2020 resume, completing 24 of 28 passes for 314 yards.

Rutgers (1-2) had a promising drive early to answer Ohio's State's first score but had to settle for a 30-yard Guy Fava field goal. Then they came out and outscored the Buckeyes 24-14 in the second half.

“You're up big at the half, and you just kind of come out and take your foot off the gas,” said Ohio State linebacker and team captain Tuf Borland.

Rutgers quarterback Noah Vedral, a graduate transfer from Oklahoma, was 22 of 33 for 168 yards. Bo Melton caught seven passes for 86 yards.

“We feel some confidence just from the fight," Vedral said. ”I’m proud of my guys for not laying down. They showed a lot of grit and ability to chop even in tough circumstances."

Ohio State rolled up 517 yards compared with 373 by Rutgers.

Rutgers: Schiano, a former Ohio State assistant in his second stint running the team from New Jersey, has the Scarlet Knights playing aggressively. They battled Ohio State but couldn't climb out of the hole they dug early.

“We played the measuring stick in our league, in the Big Ten Conference, and we didn’t quite measure up,” Schiano said.

Ohio State: The Buckeyes were sloppy and got stuck in the mud at times, but Fields can make things happen. They've got some things to clean up.

Ohio State beat a team it was supposed to beat, which probably won't impress voters much.

Attendance at cavernous Ohio Stadium again was again was limited because of the Big Ten’s COVID-19 rules, with 1,275 people mixed in among 6,200 cardboard cutouts. Concern over the virus is intensifying again in Ohio, where single-day records for new cases were broken Friday and Saturday. More than 10,500 cases were recorded statewide over the two days.

“One of the things that happened this week was we didn’t practice on Tuesday across the country (because of Election Day). And any time you change up routine, strange things happen. And I thought for us to come out the way we did that was great, I’m just disappointed about the second half. But we got to practice better if we want to be a great team.”