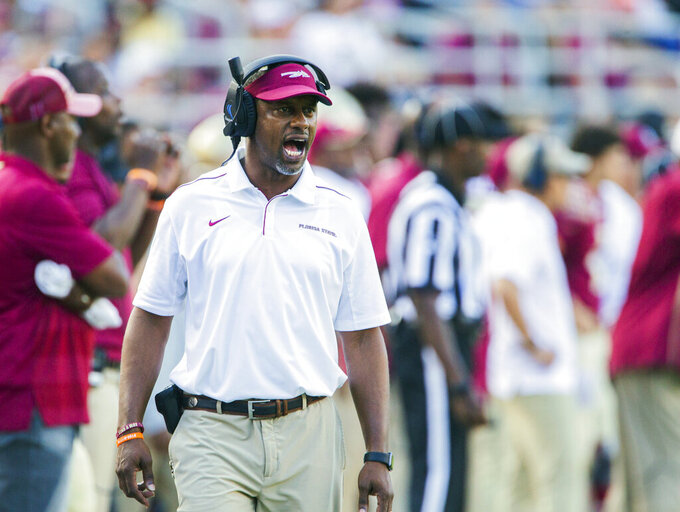 Lars-Woodbey, a sophomore who has played inside and outside linebacker, was injured in the second half of Saturday's 35-24 win over Louisville. He had 19 tackles, 1 tackle for loss and .5 sacks in four games.

"Everything happens for a reason," Lars-Woodbey posted on Twitter. "Just know that when one door closes for me, another one opens as well. I know my teammates are going to hold it down for me for the rest of this year and I can't wait to be back with them soon!"

Blackman is 86 of 124 (69.4 for 970 yards, nine touchdowns and two interceptions in 2019. The redshirt sophomore was injured on Florida State's first drive of the third quarter and was later seen on the sideline icing his left knee.

If Blackman is not available, to start Saturday against North Carolina State (3-1), the Seminoles (2-2, 1-1 Atlantic Coast Conference) will turn to Alex Hornibrook. A graduate transfer from Wisconsin, Hornibrook completed 15 of 20 passes for 255 yards, two touchdowns and no interceptions in his Florida State debut against the Cardinals on Saturday.

"What we saw is what we had been seeing since training camp," Taggart said. "He comes to practice, he comes to meetings like a pro, like he's done it before. He has put the work in to be confident in what he's doing. Putting him out on the field, I don't think anyone on our staff or our players felt like we had to worry about anything.

"We know that Alex was going to be prepared. And he showed it."

Williams missed games against Virginia and Louisville. Senior Abdul Bello has started in his place.

"Hopefully he can get back in the swing of things and be able to try to help our football team this week," Taggart said. "Bello is doing a good job for us."