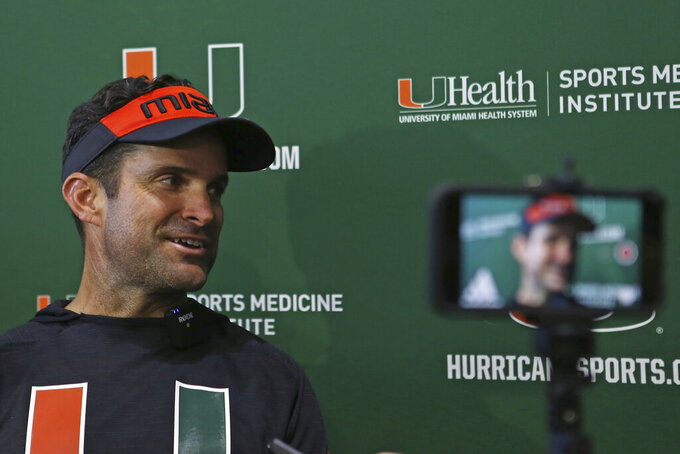 It was 45 degrees in mid-October for an 11:30 a.m. kickoff between Mississippi State and Middle Tennessee State. Mullen was calling plays in his first year as the Bulldogs' head coach, and Diaz was dialing up blitzes from unusual formations in his fourth season as the Blue Raiders' defensive coordinator.

There were a little more than 20,000 people on hand to watch a pair of teams that already had a combined six losses. It was nothing like the stage Mullen and Diaz will share when No. 8 Florida and rival Miami usher in the college football season Saturday night in Orlando.

But that otherwise forgetful game in the middle of the Volunteer State in 2009 sparked a lasting friendship that helped propel them to where they are today.

"He had the energy. He had an interesting scheme," Mullen recalled this week. "He wasn't afraid to think outside the box with his scheme and then had the intelligence to back it up."

Mullen jotted down Diaz's name on a list of "people to consider" as assistants and tucked it away in a folder on his desk. He opened it up a few months later and asked Diaz to join him in Starkville.

The Bulldogs allowed seven fewer points a game in 2010 than they did the previous year, jumping from 11th to third in the Southeastern Conference in scoring defense.

Texas took notice and hired Diaz to replace Will Muschamp, who had left to take the head coaching job at Florida.

Diaz rejoined Mullen in 2015, but lasted just a year before returning to his hometown. Miami's defense has been on the rise since, climbing from 12th to second in scoring in the Atlantic Coast Conference in Diaz's first year and popularizing the "Turnover Chain."

"Personally, we get along very well and I consider him a friend," Diaz said. "We have worked together twice, and two of those years Mississippi State had two of their best years in history there. We view the game similarly. He is a very creative guy and an outside-the-box type of thinker. I try to be the same way defensively and I think that is why we got along well together."

"I don't think there will be any type of advantage because we know him and he knows us," Diaz said. "It is going to come down to things like who can block, who can get off blocks, and can cover and who can throw and catch."

Beyond the opener, Mullen anticipates Diaz has and will continue to take a familiar approach to putting his stamp on Miami.

"I bet there's going to be a lot of crossover as to how he runs the program, and I think a lot of it is just how we view the game," Mullen said. "How we view the development of the game. How we view game planning. ... How are we putting players in the best position to be successful? Are we developing young men on and off the field? Are we maximizing their ability to become the best that they can be and using the game of football to do it?

"I imagine that's kind of how we view things. We were together and we talked a lot about that, about the game and about just the program as a whole of what it is, more than just always just the scheme."

Diaz's defensive scheme, though, is what essentially brought them together on that cool morning at Floyd Stadium.

"We never saw anything (like it)," said Florida offensive line coach John Hevesy, whose linemen were wide-eyed early in the game that Mississippi State eventually won by three touchdowns. "At the time, it was unique. He was doing something different."