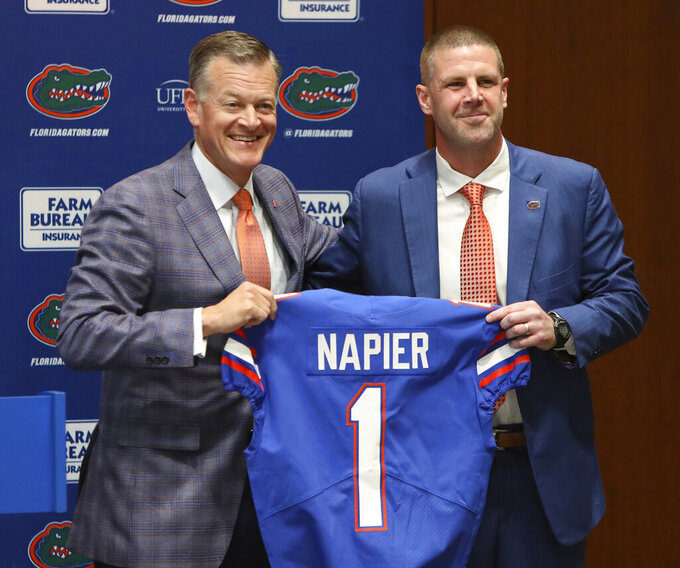 GAINESVILLE, Fla. (AP) — Florida athletic director Scott Stricklin received a three-year contract extension that nearly doubled his salary and made him one of the highest-paid administrators in the powerhouse Southeastern Conference.

Stricklin agreed to the new deal in April and signed it in July, according to a public records request the school returned on Monday.

Stricklin’s compensation package also includes a $250,000 retention bonus paid annually, a $110,000 longevity incentive paid annually and an annual expense account totaling $95,000. He gets another $62,000 every year in fringe benefits.

The contract puts Stricklin near the top of the AD pay scale in the SEC. Tennessee’s Danny White heads the list at $1.8 million annually.

Stricklin has been Florida’s AD since November 2016 and spearheaded sweeping changes. Most notably, he lured longtime SEC play caller Dan Mullen from Mississippi State to rejuvenate a stale football program and then moved quickly to replace Mullen when it clearly plateaued. Stricklin hired Billy Napier last month in hopes of taking the Gators to new heights.

Florida also has spent nearly $280 million over the last six years on capital improvements affecting academics, football, basketball, baseball, softball, soccer and lacrosse, many of which Stricklin played a key role in getting from concept to completion.

The coronavirus pandemic delayed progress on Florida’s $85 million football facility, which is now scheduled to be completed next spring.

Florida’s athletic department had a $54.5 million shortfall during the 2020-21 fiscal year because of the pandemic, significant financial losses the Gators were able to weather with a supplement from the SEC and a sizeable reserve.

Stricklin avoided layoffs, furloughs and salary cutbacks. The Gators did stop pension payments for a year and eliminated bonuses for everyone on their payroll, including coaches.

Stricklin’s tenure hasn’t been totally smooth. He gave Mullen a contract extension in June following a tumultuous season that included several public missteps and an NCAA recruiting violation that landed the Gators on probation for the first time in 30 years.

He also gave women’s basketball coach Cam Newbauer a contract extension in March despite years of complaints and at least some level of concern about a toxic culture that included verbal abuse toward players, assistants and staff members.