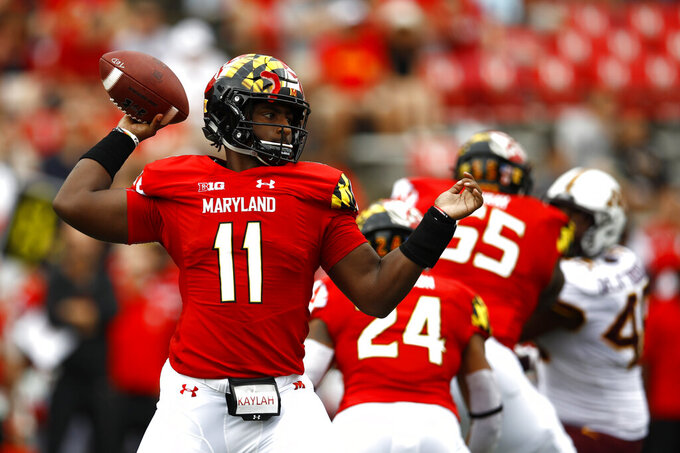 FILE - In this Sept. 22, 2018, file photo, then-Maryland quarterback Kasim Hill throws to a receiver in the first half of an NCAA college football game against Minnesota in College Park, Md. Former Maryland quarterback Kasim Hill has transferred to Tennessee. Tennessee athletic department spokesman Zach Stipe confirmed Thursday, Aug. 22, 2019, that the Volunteers have added Hill as a walk-on. Hill won’t play this season due to NCAA transfer rules.(AP Photo/Patrick Semansky, File)

247Sports first reported Tennessee had added Hill, who has torn ligaments in each of his knees during his college career.

Hill started Maryland's first 10 games as a redshirt freshman last year before tearing the anterior cruciate ligament in his left knee. He had torn the ACL in his right knee during Maryland's third game in 2017.

He completed 53.4 percent of his career passes at Maryland for 1,313 yards with 11 touchdowns and four interceptions. Hill also ran for 45 yards and one touchdown on 13 carries.