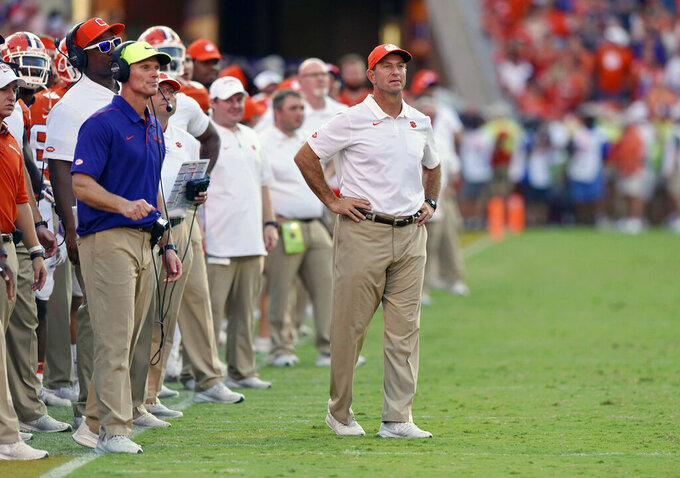 FILE - In this Saturday, Sept. 7, 2019 file photo, Clemson head coach Dabo Swinney, center, and defensive coach Brent Venables, left, watch the action during the second half of an NCAA college football game against Texas A&M in Clemson, S.C. Tyler Davis didn’t plan on starting this soon for Clemson, given the depth the Tigers had stockpiled at defensive tackle the past few seasons. Clemson coach Dabo Swinney and defensive coordinator Brent Venables had planned for the talent drain and had brought along several linemen like Williams and junior Xavier Kelly to take over. They didn’t count on Davis forcing his way into the starting lineup. (AP Photo/Richard Shiro, File)

CLEMSON, S.C. (AP) — Tyler Davis didn't plan on starting this soon for Clemson, given the depth the Tigers had stockpiled at defensive tackle the past few seasons.

But it's Davis who started the first two games for the top-ranked Tigers (2-0) and drawing comparisons to the man-mountain in All-American Dexter Lawrence who just needed a couple of games to cement his starting spot.

"I don't think its pressure," said Davis, who has been given the nickname "Baby Dex" by coach Dabo Swinney. "I think I just came in and worked."

And outworked all others at his position.

Redshirt sophomore Jordan Williams seemed to be in line for the starting spot after Lawrence decided to enter the NFL draft. Lawrence, picked No. 17 by the Giants, was one of three first-rounders selected from Clemson's starting defense last season.

Clemson coach Dabo Swinney and defensive coordinator Brent Venables had planned for the talent drain and had brought along several linemen like Williams and junior Xavier Kelly to take over. They didn't count on Davis forcing his way into the starting lineup.

He became the first true freshman defensive tackle to start at Clemson since Jeff Mills in 1974.

"I was kind of surprised," Davis said.

Davis has been a factor in his two games, collecting seven tackles against Georgia Tech and No. 15 Texas A&M. More importantly, he has proven just as difficult to run against as Lawrence had been — helping the Tigers give up just 210 yards rushing combined to the Yellow Jackets and Aggies.

Davis and the Tigers defense head to Syracuse on Saturday, the site of Clemson's last regular-season loss in a 27-24 defeat in October 2017.

Orange coach Dino Babers is searching for a front-line push of his own to slow down the Tigers and quarterback Trevor Lawrence.

"I don't know how we're going to do that yet because they're really good at protecting him," Babers said. We wouldn't be the first football team that's played them and tried to put pressure on him and when the game was over feel empty-handed."

Davis is a 6-foot-2, 295-pound defender from Apopka, Florida, was ranked the seventh best defensive tackle prospect by ESPN.com whose speed and strength drew offers from Ohio State, Michigan, Florida State and Georgia among others. He had favored Ohio State until his Clemson visit.

He thought the coaches and players he met on his visit were personable and smart and knew it was the place he wanted to be.

"It's just more family-oriented," he said. "I feel like this is home and the best fit for me."

Venables said from the day he enrolled, Davis immersed himself in the film room and he studied the technique necessary to play for the defending national champions. Davis said Lawrence and another All-American in Christian Wilkins helped him prepare during the early summer before they left for pro camp.

Where Davis has shined brightest is on the field. His push in the 52-14 opening win against Georgia Tech on Aug. 29 kept the Tigers in the Yellow Jackets backfield much of the game. Davis was just as strong against Texas A&M, helping Clemson hold the Aggies to 53 yards on the ground.

Davis believes he can continue his quick improvement. Now, if he could do something about the nickname hung on him by Swinney. Davis is 2 inches shorter and about 50 pounds lighter than "Big Dex" Lawrence.

"I didn't really like it at first because I don't think me and Dex look nothing alike," Davis said. "But I guess a lot of people see it."