Georgia looks to solidify No. 1 ranking against Vanderbilt 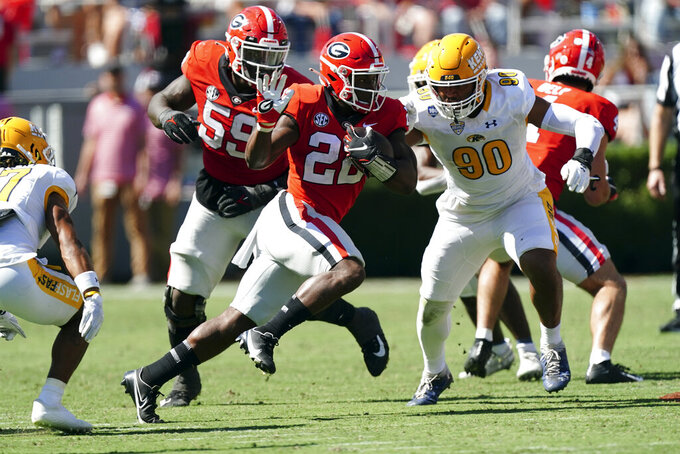 Line: Georgia by 38 1/2, according to FanDuel Sportsbook.

Georgia will look to protect its unbeaten overall and SEC records. Shaky wins over Kent State and Missouri caused the Bulldogs to drop from the No. 1 spot in the AP Top 25 before moving back to the top spot following last week's 42-10 win over Auburn. Georgia, the defending national champion, will try to build on the win over Auburn and again show it has returned to its top form. Vanderbilt brings a 23-game SEC skid into this game, 10 of those under second-year coach Clark Lea who’s still looking for his first league victory at his alma mater.

Georgia LB Jamon Dumas-Johnson vs. Vanderbilt RB Ray Davis. Davis ranks fifth in the league with his 507 yards rushing. Georgia ranks third in the SEC and 12th in the nation, allowing only 89.8 yards per game on the ground. Dumas-Johnson has been Georgia's leader in tackles the last three games, including a career-high eight against Missouri. He has 29 tackles and two sacks for the season.

Vanderbilt: De’Rickey Wright. The linebacker and safety had two interceptions against Ole Miss, becoming the Commodores’ first defender with more than one interception in a game since Nov. 9, 2019. Wright ranks second in the SEC with three interceptions.

Georgia: RB Branson Robinson, a freshman, set a career high with 98 yards rushing, including a 15-yard scoring run, last week against Auburn. He took advantage of an opportunity after Kendall Milton left the game with a groin injury and could play a big role against the Commodores.

Georgia has won the last four games in the series, including a 62-0 win in 2021. The Bulldogs are 20-4 in the rivalry when Vanderbilt has been the Homecoming opponent. ... Georgia ranks fourth in the nation with its average of 10.7 points allowed. The Bulldogs led the nation while allowing 10.2 points per game in 2021. ... This is Vanderbilt's third consecutive game against a top 10 team. It is also the first time Vanderbilt has played three top 10 opponents since the AP poll was started in 1936. ... Vanderbilt has scored on all 21 red zone possessions, including 17 TDs. The Commodores are among four FBS teams to get points on each red zone opportunity with at least 20 chances. ... Vandy's Davis has run for at least 100 yards twice this season. He had a season-high 27 carries against Ole Miss. ... Vanderbilt WR Jayden McGowan had a season-high seven catches for 104 yards and a TD last week. He ranks third in the SEC with 29 catches.