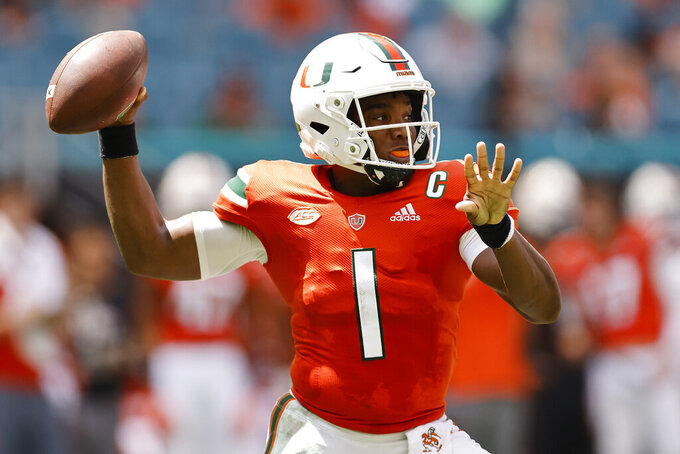 Oklahoma's Spencer Rattler and Miami's D'Eriq King have been two of the most prominent football players to cash in on college sports' new era of allowing athlete endorsements.

A month and a half into the first season during which a player can earn money from his name, image and likeness, King is out for the season with an injury and Rattler, a preseason All-American, is a backup quarterback.

A cautionary tale for companies looking to partner with college athletes in the future?

Those who work with athletes, schools and brands say everything about NIL compensation for college athletes is still evolving, but the change in status for a couple of high-profile players is unlikely to cool the burgeoning market.

“That’s some of the risks you're going to take with doing a deal. But those same risks occur in the real business world: Is this marketing campaign going to work?” said Lyle Adams, a former Wake Forest soccer player and founder of Spry, a software company that schools and athletes can use to monitor NIL compliance. "I think as the space matures, brands and athletes will be able to navigate this a bit better in the future.”

If anything, the way the season has played out for Rattler and King shows why allowing athletes to capitalize on what could be the height of their fame and marketability was so important.

Rattler entered the season being touted as a Heisman Trophy favorite and possible high first-round NFL draft pick. That was only part of what made him one of the most famous players in college football.

He had also cultivated a huge social media following, with 390,000 Instagram followers. Opendorse, a company that provides a host of NIL services to dozens of Division I universities and colleges, estimates that following could make Rattler $10,000-$20,000 for one promotional IG post.

Darren Heitner, a Florida-based sports and entertainment attorney, doubts any company that partnered with Rattler has regrets.

“These brands received a very strong return on investment right around the time they entered into these arrangements,” said Heitner, who consulted on Florida's NIL law. “That return probably exceeded whatever their spends were right around that time alone. And that’s a byproduct of the vast amount of attention paid on NIL as a whole, but also these individuals, specifically. And their marketability. And their recognizability.”

Opendorse CEO Blake Lawrence said the company is still gathering data in this first year of NIL to determine the exact correlation between performance and marketability.

For some athletes, their personal brands are already so strong that a dip in performance might not result in a corresponding dip in NIL value, Lawrence said. What that looks like as more athletes enter the NIL market, especially in the highest profile sports such as football and men's basketball, is still to be determined.

Even after Rattler was benched during the Texas game earlier this month, he added almost 900 Instagram followers. He is still the most followed college football player in the country with the highest rate of audience engagement, Lawrence said.

Rattler has been one of the most talked-about players in college football this week and what he does next (go pro? transfer?) is still a huge story.

Caleb Williams, the quarterback who replaced Rattler against the Longhorns and started this weekend against TCU, has gone from 39,000 Instagram followers before the Texas game to more than 65,000 after another terrific performance Saturday night.

Rattler remains a conversation starter in a way he might never be again, even if he goes on to a successful NFL career.

That's especially the case for King, an undersized quarterback who was coming off a knee injury. King's chance of becoming an NFL star to match his status at Miami going into this season was not great, and now a shoulder injury has ended his season after four games.

Like a lot of college stars, King has a platform unlikely to ever be bigger. Not allowing him to capitalize on that — the way any other college student can — was why many decried NCAA rules prohibiting NIL compensation to athletes for decades. That ended July 1.

“It’s so important for these athletes to have this opportunity, whether it’s due to an injury or poor performance, that they can capitalize off their fame now because nothing is guaranteed in the future," Heitner said.