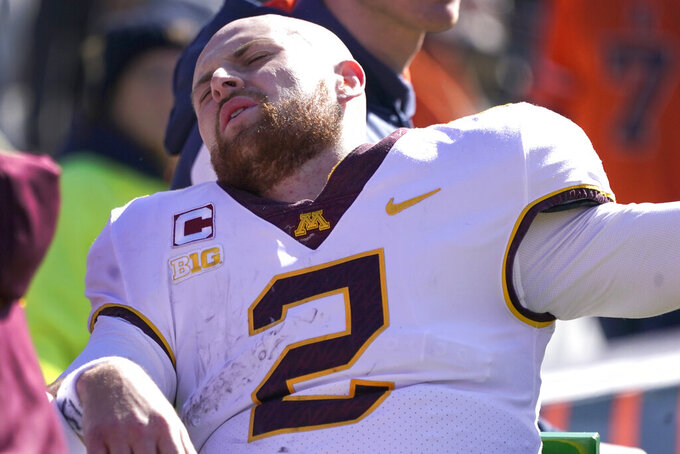 Minnesota quarterback Tanner Morgan is transported to the locker room after being injured in the second half of an NCAA college football game against Illinois, Saturday, Oct. 15, 2022, in Champaign, Ill. (AP Photo/Charles Rex Arbogast) 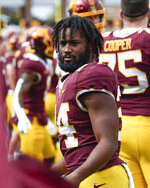 Minnesota has lost two straight to Big Ten West opponents and is desperate for a win in this crossover game. The Gophers are just as physical as Michigan, which hammered Penn State last week, and star RB Mohamed Ibrahim must be licking his chops knowing he'll go against a defense that allowed 418 yards rushing to the Wolverines. There's uncertainty at quarterback for both teams. Minnesota's Tanner Morgan (head) and Penn State's Sean Clifford (shoulder) were knocked out of games in the fourth quarter last week.

The Boilermakers need this one to take sole possession of first place in the West Division and are on a roll with four straight wins. The Badgers are coming off a two-overtime loss at Michigan State and will be all but out of the division race if they lose here. Aidan O'Connell is coming off one of his best performances in a win over Nebraska and will be going against an average pass defense that hasn't fared well against above-average passers. Purdue is a slight underdog, perhaps because it's lost 15 in a row to the Badgers.

Wisconsin is in a six-game stretch with four losses for the first time since the end of the 2012 season. ... Iowa's defense has allowed 10 or fewer points in five of the first six games for the first time since 1933. ... Rutgers goes into its home game against Indiana as the eighth-most improved defensive team in the country. The Scarlet Knights are allowing 1.26 yards less per play than in 2021. ... Cam Camper needs one more 10-catch game to join Whop Philyor (2019) and Damarlo Belcher (2010) as the only Indiana players with three in a season.

Nothwestern is a 13 1/2-point underdog at Maryland, according to FanDuel Sportsbook, and the Terrapins might be ripe for an upset with QB Taulia Tagovailoa a game-time decision because of a right knee injury. The Terps came from behind to win at Indiana last week with backup Billy Edwards Jr., but they ran on 18 of his season-high 21 snaps and he was off-target with his three passes.

Ohio State WR Marvin Harrison Jr. has gone over 100 yards in receptions in three of six games. He has two games with three touchdowns and a total of nine TDs, and he's been targeted 46 times with no drops. He and teammate Emeka Egbuka are going to be problems for an Iowa pass defense that ranks third nationally.