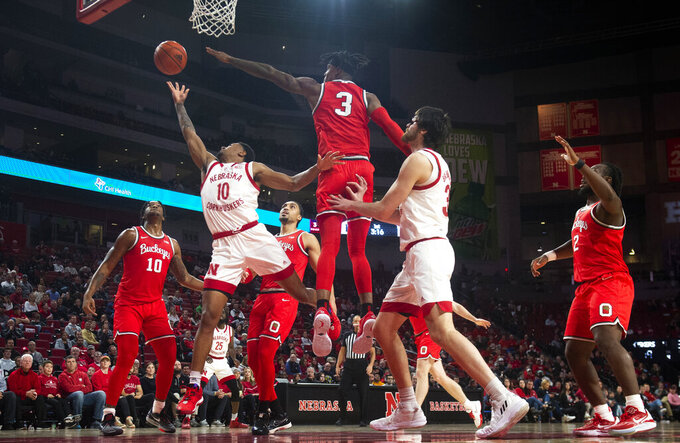 Nebraska's Jamarques Lawrence (10) makes a layup against Ohio State during the first half of an NCAA college basketball game Wednesday, Jan. 18, 2023, in Lincoln, Neb. (Justin Wan/Lincoln Journal Star via AP) 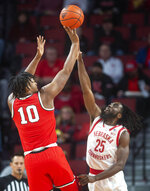 Keisei Tominaga added 11 points for Nebraska (10-9, 3-5 Big Ten). Derrick Walker, Nebraska’s leading scorer (14.1 points per game) and rebounder (7.7), fouled out when he was called for a charge with 2:09 left, finished with eight points, 10 rebounds and four assists.

Brice Sensabaugh scored back-to-back buckets to give Ohio State a two-point lead with 8:55 to play but the Buckeyes went without a field goal for the next 6 1/2 minutes. Denim Dawson answered with a layup and Jamarques Lawrence followed with a 3-pointer to make it 52-49 a minute later and the Cornhuskers led the rest of the way.

Sean McNeil missed a clean look at a potential tying 3-point shot from the left wing as time expired.

Nebraska coach Fred Hoiberg was called for a technical foul with 12:33 to play. He appeared upset after a no-call on what he thought was a Buckeyes foul and exploded when Wilhelm Breidenbach was called for an moving screen moments later. McNeil, who went into the game 18-for-18 from the free-throw line this season for Ohio State, missed both technical free throws.

Nebraska has played the nation’s toughest schedule according to the NCAA’s NET rankings and 10 of its 19 games this season have been against Quad 1 opponents.

Nebraska hits the road to take on Penn State on Saturday