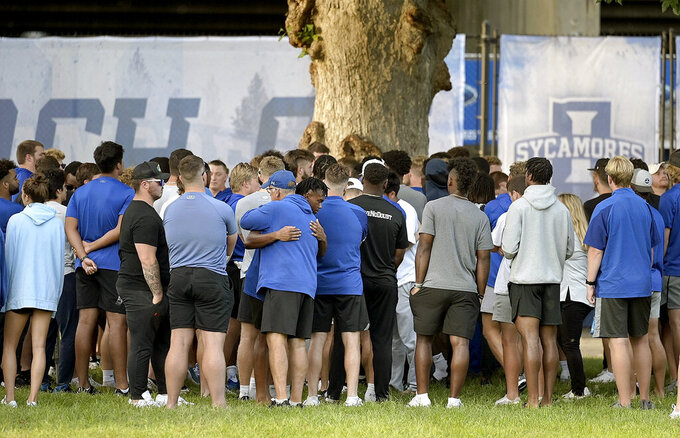 Indiana State football assistant head coach Mark Smith hugs a player after a vigil on Sunday, Aug. 21, 2022 at Memorial Stadium in Terre Haute, Ind., for students, including fellow football players, who were involved in a car crash earlier in the day. (Joseph C. Garza/The Tribune-Star via AP) 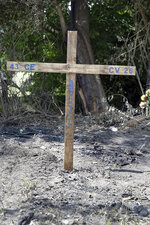 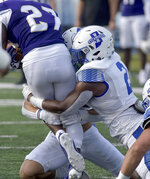 Mourning and sadness replaced X's and O's. Visiting dorms and food runs were more important than studying the playbook. Talking through the emotions of a car crash that left three students dead and two hospitalized with serious injuries, four of them football players, was suddenly a critical part of Indiana State's routine.

Players and coaches were coping with the most daunting opponent of all — grief.

“I've never been through anything like this," Hendrix said. “I've been a captain for about three years now and I never really experienced how to lead in this type of situation. I've never had a teammate or two teammates die like this.”

The vocal, sixth-year senior and his teammates quickly adapted.

Hendrix was one of four players who spent nearly 90 minutes inside a freshman dorm after the crash, talking and listening about the two first-year teammates who died: Caleb VanHooser of Liberty Township, Ohio, near Cincinnati and Christian Eubanks of Waukegan, Illinois, in the suburbs north of Chicago. Jayden Musili of Fort Wayne, Indiana, who attended Indiana State but was not an athlete, also was killed.

Two redshirt freshmen players — John Moore of Wheaton, Illinois, and Omarion Dixon of Lafayette, Indiana — survived after another student pulled them from the burning wreckage 11 miles from campus, about an hour's drive west of Indianapolis. They have been released from a hospital.

The group was returning from home in the early morning hours of Aug. 21. According to the county sheriff's report, a wet road, excessive speed and alcohol may have played roles in the single-car accident.

Back at Indiana State, players weren't looking for explanations. They needed support. Coach Curt Mallory canceled practice while the Sycamores' upperclassmen did everything they could think of to assauge the pain, even taking one teammate to an ice cream shop.

“They were upset because when we went to the dorms it was very, very fresh,” said Hendrix, adding that some players wrote Post-It notes to their late teammates.

“We sat there and just talked,” he said. "You've got to talk about what you're feeling because if you don't and you're holding anything back, that's when it can really creep up on you and you never know what can happen.”

Indiana State honored its two late teammates with a helmet sticker and by playing last week's season opener in all-white uniforms and all-white helmets. Two crosses have been placed at the scene of the accident, one of which bears a blue-and-white Indiana State pennant and a small teddy bear.

Familiar mottos such as “March On” and “All In” have different meanings now and are reminders of how much has changed.

The 53-year-old Mallory, a former Michigan player who followed his father and brothers into coaching, has spent three decades in the profession. He had never gotten a pre-dawn knock on the door for something like this, not until athletic director Sherrard Clinkscales showed up at 4 a.m.

“It's been a tough couple weeks," Mallory said. "When you lose part of the family, you get through it together. To get back on the practice field was the hardest thing to do, but it was the right thing to do and once we did, things started to get a little better.”

So did last Thursday's opener. Following a pregame moment of silence, the defense helped Indiana State hang on for an emotional 17-14 overtime victory over North Alabama.

“It was very difficult to get through but when stuff like this happens you have to lean on each other,” Brown said. "And win or lose, we were happy with the way we played for those guys.”

After one practice this week, players left the field smiling, joking and looking ahead to Saturday's game at Purdue (0-1). The Boilermakers will hold a moment of silence for the three students who died.

If they beat Purdue for the first time, it would give the Sycamores their first 2-0 start since 1986.

But this season is about much more than a record for a school perhaps better known as the alma mater of basketball star Larry Bird. Everyone wants this football season to be remembered for what Indiana State achieves — not what's been lost.

”They'll always be with us, you know," Hendrix said. "They're gone, but they're not forgotten and that (helmet sticker) is a great sign they'll always be here as Sycamores."