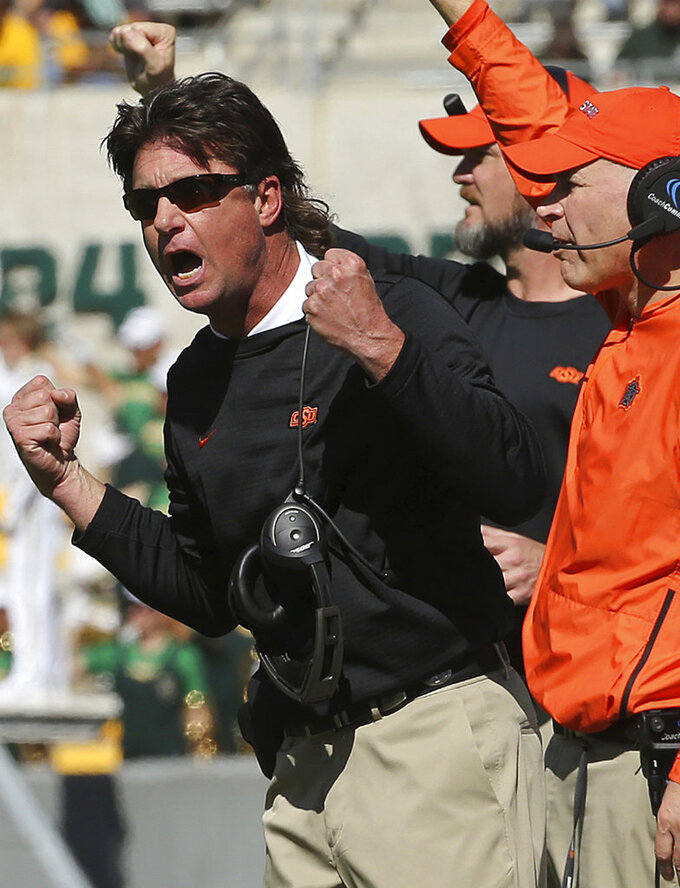 The coach said Monday he will consider benching players for committing bad penalties, an issue that's plagued the inconsistent Cowboys (5-4, 2-4 Big 12) all season and especially in a crushing 35-31 loss to Baylor on Saturday.

Oklahoma State had a season-high 12 penalties for 133 yards against the Bears, including three defensive flags in the fourth quarter that allowed Baylor to erase a 31-21 deficit in the final eight minutes. The Bears scored the winning touchdown with seven seconds left.

"We've had that issue for the majority of the year," Gundy said. "We've had more facemasks, more late hits, more 15-yard penalties, more chop blocks than I've had in years, I would guess.

"And we're not a good enough team to do that, to get away with that. It has been talked about, it has been preached, literally over 100 times that I've said it over the last three months."

Oklahoma State has been flagged this season for 68 penalties and 699 yards — the latter is the ninth most out of 130 FBS schools. The only games this year when they've had fewer than seven flags or 55 yards of penalties were their two signature victories, a 44-21 win over then-No. 17 Boise State (four penalties for 25 yards) and 38-35 over then-No. 6 Texas (four for 52).

The Cowboys have a shot at another marquee win when they visit No. 6 Oklahoma (8-1, 5-1) on Saturday. They are also one win shy of being bowl eligible for the 13th straight season.

The most damaging penalties against Baylor were a facemask and a personal foul for shoving the ball carrier once he was already out of bounds. That made it all the more exasperating for Gundy, the father of three teenage sons who says the time has come for tougher parenting on the sidelines.

Gundy said offending players could end up on the sidelines, even if it that means replacing them with less talented or experienced teammates.

"If your best guys are on the field that give you your best chance to win, and they're not playing smart football and we're not getting any results, at some point, you've got to say, 'Okay, if you're going to be selfish because you're taking away from the other 10 guys, then you're going to have to come over here and stand by us,'" Gundy said. "And then we have to put a guy in that may be less experienced or maybe not as athletic, so you really hurt the whole team, but I really don't know what other options we're faced with at this particular time, because what I've been doing is not working."