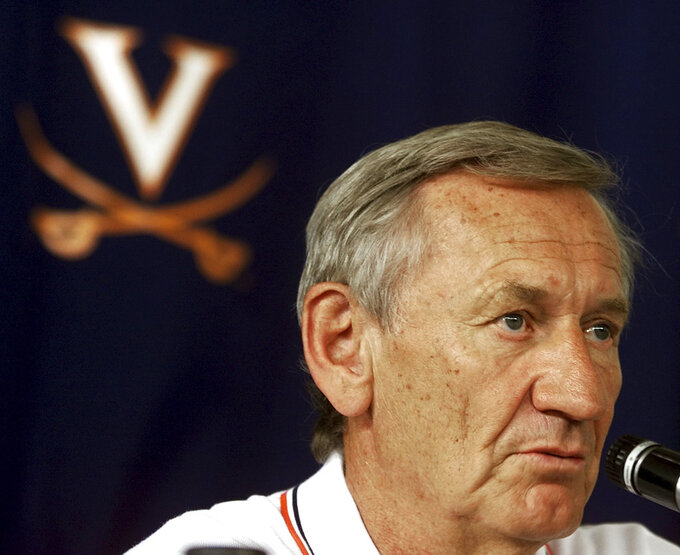 FILE - In this Aug. 11, 2000, file photo, then-Virginia NCAA college football coach George Welsh speaks at a news conference in Charlottesville, Va. Welsh, who coached football at Virginia for 19 years and retired as the Atlantic Coast Conference's career victories leader, has died. The school made the announcement in a release Friday, Jan. 4, 2019, saying Welsh's family says he died peacefully in Charlottesville on Wednesday. He was 85. (AP Photo/Wayne Scarberry, File)

George Welsh, who coached football at Virginia for 19 years and retired as the Atlantic Coast Conference's career victories leader, has died.

The school made the announcement in a release Friday, saying Welsh's family says he died peacefully in Charlottesville on Wednesday. He was 85.

"I am saddened to hear that Coach Welsh passed away this week," Virginia coach Bronco Mendenhall said Friday on Twitter. "My condolences go out to his family. He was a true pioneer for UVA football and provided the model of success we are working hard to replicate. We will miss his frequent visits to the football offices."

A former quarterback at Navy who finished third in the Heisman Trophy balloting as a senior, Welsh took over a Cavaliers program that was sometimes derided as "Cadavaliers" because it had had just two winning seasons in 29 years. He guided Virginia to an 8-2-2 record in his third season, which ended with the school's first appearance in a bowl game. The Cavaliers faced Purdue in the Peach Bowl, winning 27-24.

Welsh guided Virginia to bowl games 11 more times during his tenure and, in 1990, their only No. 1 ranking.

His quarterback when the Cavaliers rose to No. 1 was Shawn Moore, who recalled Welsh's ability to get Virginia prospects to come be part of what the football program he was building.

"George's personality wasn't going to captivate you sitting in your living room, but he had an incredible staff and once you got there, you realized you were being coached by one of the best preparation coaches of all time," Moore said. "He just prepared you like you wouldn't believe. I can't count the number of times he would kick us off the practice field because we weren't prepared mentally or physically."

When the Cavaliers rose to No. 1, he said, Welsh worked to keep the team from getting overconfident. They relinquished the top spot after a 41-38 loss to Georgia Tech.

Virginia shared the ACC title twice, in 1989 and 1995. In 1995, they became the first ACC team to beat Florida State, which had been unbeaten in league play since joining the conference in 1992.