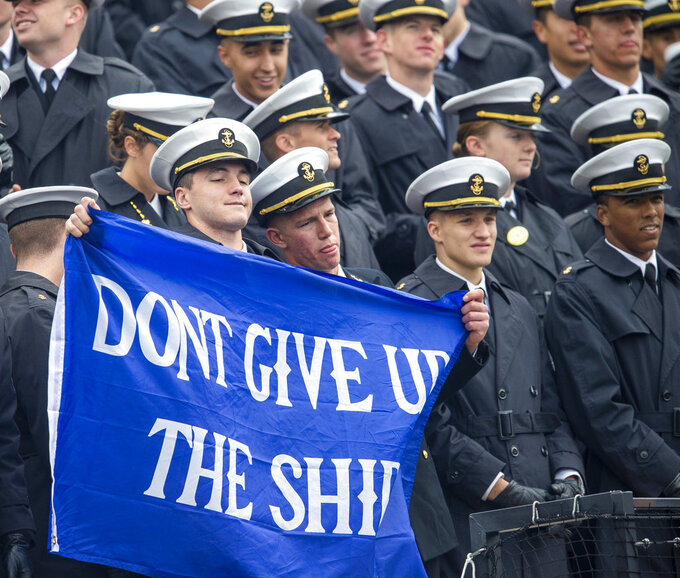 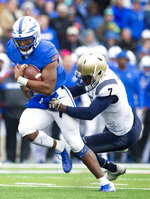 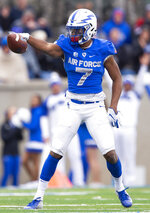 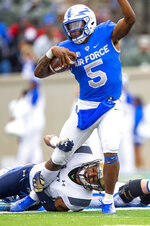 AIR FORCE ACADEMY, Colo. (AP) — Once D.J. Hammond got back in the game, he turned his first career start into a tour de force.

Hammond, sidelined early on after a helmet-to-helmet collision, returned to run for three touchdowns and throw for another, leading Air Force past Navy 35-7 on Saturday.

Joseph Saucier also scored on a 48-yard run for Air Force (2-3), which took the first leg in the competition among the service academies for the Commander in Chief's trophy. Air Force will play at Army on Nov. 3 while Navy (2-3) plays Army on Dec. 8 in its final regular-season game.

Hammond was injured on a third-down run in the opening minutes of the game. He returned to throw a 61-yard touchdown pass to Ronald Cleveland and run for touchdowns of 1, 2 and 5 yards.

During Air Force's second offensive series, Hammond absorbed successive hits to his head by two Navy defenders. Shaken, Hammond lay on the ground for several moments while being tended to by team trainers and medical staff. He sat up and was helped to his feet before being led off the field for further examination.

"When I was down on the ground, it hurt. That's why I was down there for so long," said Hammond, who learned at the pregame morning walkthrough that he would start. "When I got up, I felt fine, but I had to go through the concussion protocol."

Officials, after reviewing the hit, penalized linebacker Taylor Heflin for targeting. Heflin was disqualified from playing in the remainder of the game.

Isaiah Sanders played in place of Hammond for most of the first quarter and part of the second before the starter was cleared to return.

Up by seven at halftime, Air Force added two touchdowns in the third quarter with Hammond leading a pair of 75-yard drives that he finished with 5- and 1-yard scoring runs, respectively. He added the 2-yarder early in the fourth quarter on a quarterback draw.

"We got our butts whupped," Navy coach Ken Niumatalolo said. "It's hard to put into words. We've been playing these guys for a long time and this was one of the worst whuppings we've gotten in a long time."

Navy struck first on a 2-yard touchdown run early in the second quarter by Garret Lewis, his first play in relief of starter Malcom Perry.

But the Falcons came back to score a pair of touchdowns less than two minutes apart in the second quarter to move in front 14-7 at the half, triggering a run of 35 consecutive points by the Falcons.

"We had to make a statement saying that we're still here," Hammond said after the Falcons snapped a three-game losing streak. "Air Force wasn't going anywhere. We made that statement today."

Hammond, in his second series since returning to the field, connected in the flat with Cleveland who turned a short reception into a 61-yard catch and run for a touchdown midway through the second quarter.

Saucier was able to turn the corner after taking a pitch from Hammond, outrunning defenders along the sideline to go in for the score.

"I think beating Navy is great but that game is over and we've got to use this energy and everything that we've got moving forward and just ride the wave," Air Force linebacker Brody Bagnall said.

Navy: After opening with an early score, Navy's offense, which entered averaging 36 points per game, could get no traction. In particular, the Midshipmen's running attack struggled against the Falcons' defense, gaining 129 yards, down from its average of 355.6 yards entering the game.

Air Force: Hammond appears to have settled questions over Air Force's quarterback position. The sophomore saw his first extensive action a week ago in relief of an ineffective Arion Worthman, playing well in the final 1½ quarters in a loss to Nevada. He was rewarded with his first career start against Navy and showed grit and poise while firming up his hold on the job.