Heisman gets defensive with Hutchinson, Anderson in top 5 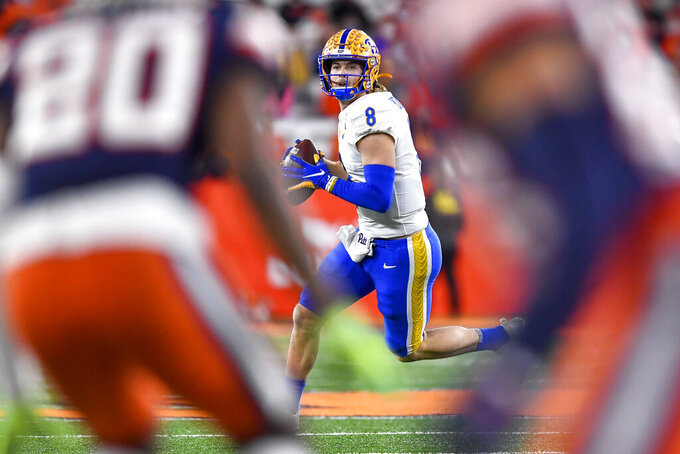 NEW YORK (AP) — Bryce Young was disappointed for his friend.

The Alabama quarterback was thrilled to find out he was a Heisman Trophy finalist, of course, but believes teammate Will Anderson Jr. deserved the honor as well.

Anderson, a sophomore linebacker, has been a terror this season, leading the nation in sacks (15.5) and tackles for loss (31.5), but he wasn't able to crack the top four in the Heisman voting and that meant no trip to New York for Saturday's presentation ceremony.

Young will be joined by fellow quarterbacks Kenny Pickett of Pittsburgh and C.J. Stroud of Ohio State along with Michigan defensive end Aidan Hutchinson.

Defensive players rarely get their due when it comes to the Heisman Trophy. The only winner to have played primarily defense was Michigan cornerback Charles Woodson in 1997, and even he dabbled in offense and returned punts. Only two defensive player have done as well as second-place in the award's 86-year history.

“It's tough, because this award is very quarterback dominant, offensively dominant players” Hutchinson said Friday during a media availability at a Manhattan hotel with Young and Stroud. Pickett was in Baltimore for another award ceremony.

“So to be here and to be a finalist, it's really great to put on for all the other defensive players in the country,” Hutchinson said. “It's really such an honor to be here.”

The Heisman Trust made a tweak this year to the way finalists are determined. In the past, three to six players would be invited to New York as finalists based on the gap in votes received.

The plan going forward is for the top four vote-getters to be invited to New York — no more, no fewer.

“I definitely feel like he deserves it,” Young said of Anderson. “And a lot of people share that same opinion,.”

While Anderson’s omission among the finalists seemed like a snub, it turns out this is already one of the best Heisman showings for defensive players .

It was revealed Anderson was fifth in the voting Thursday night, when the players who finished five through 10 were announced on ESPN. Georgia defensive tackle Jordan Davis finished ninth. Three defensive players in the top 10 matches the most since there were four in 1969.

No matter how the top four shakes out, Hutchinson and Anderson will be the first defensive players to finish in the top five of Heisman voting in the same season since 1962, when Minnesota’s Bobby Bell was third and Alabama’s Lee Roy Jordan was fourth.

Pittsburgh defensive end Hugh Green in 1980 and Notre Dame linebacker Manti Te'o in 2012 were both runners-up for the Heisman. But since Green was a distant second to South Carolina running back George Rogers, only 40 defensive players have finished in the top 10 in the Heisman voting, including the three this year.

Hutchinson certainly earned his spot. The senior was a force for the Big Ten champions, but his traditional counting stats fell short of Anderson's.

Hutchinson, whose father, Chris, was a star defensive lineman for Michigan, has 14 sacks among his 15.5 tackles for loss, and 58 total tackles. He also had 12 hurries, forced two fumbles and broke up three passes. Anderson was credited with 91 total tackles, nine hurries and two passes broken up.

Hutchinson said the ability to accumulate stats and have the ball — and, to some extent, the game — in your hands is a huge advantage for offensive players when it comes to individual awards.

Hutchinson’s true value might have been best judged by more modern metrics. Pro Football Focus, which grades players play-to-play each game the way coaches do, gave Hutchinson a 94.7 out of a 100 this season, the best for any defensive player in the country.

Anderson's grade of 89.8 was 10th among what PFF describes as edge defenders.

Young heads into Saturday as the clear favorite to win the Heisman, but Hutchinson is hoping maybe there is a Michigan thing going on with defensive players. The last Michigan player to be a finalist was defensive back Jabrill Peppers, who finished fifth in 2016.

“Glad to carry on this Michigan tradition of being a Heisman finalist,” Hutchinson said. “I think I make a strong case.”