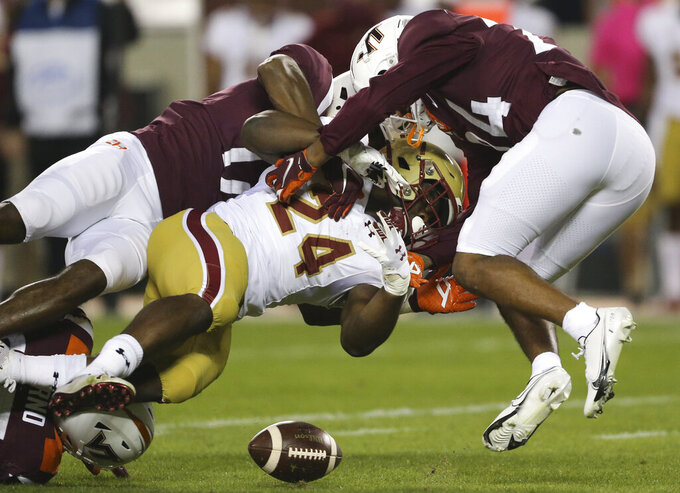 BLACKSBURG, Va. (AP) — Virginia Tech is starting to get most of its key pieces back to full strength.

And Saturday night, the Hokies showed what type of team they can be.

Hendon Hooker ran for a career-high 164 yards and three touchdowns and threw for a score in No. 23 Virginia Tech’s 40-14 victory over Boston College.

Khalil Herbert added 143 yards rushing for the Hokies (3-1, 3-1 Atlantic Coast Conference). They ran for 350 yards in bouncing back from a road loss to North Carolina.

Tech played without more than 20 players in wins over NC State and Duke and without 15 in the loss to the Tar Heels – and missed coaches in all of those games. But only two starters were out against the Eagles (one because of an injury), all the coaches were available, and Hooker looked comfortable in his first start of the season.

It all added up to the Hokies’ best performance of the season.

“Just awfully proud of our coaches and players bouncing back,” Virginia Tech coach Justin Fuente said. “It was kind of cool to have all our coaches on the sideline and in the booth today for the first time. Hopefully, we’ll continue to get some of our guys back as we go through the season.

“I think it’s pretty obvious what the story tonight was – creating turnovers on defense and rushing the ball on offense … Happy to get the win.”

Virginia Tech scored off of four of BC’s five turnovers to pull away. The Eagles (3-2, 2-2) turned it over three times in the first half alone, with the most damaging coming when quarterback Phil Jurkovec overthrew an open Jaelen Gill deep in Virginia Tech territory. Devin Taylor intercepted the pass for the Hokies, and Hooker’s 29-yard touchdown pass to Herbert made it 17-7.

Boston College cut it to 17-14 on a touchdown pass from Jurkovec to Hunter Long with 7:11 left in the third quarter, but the Hokies scored the final 24 points – 17 of those off BC turnovers.

“You can’t beat anybody turning the ball over five times,” BC coach Jeff Hafley said. “You can’t. Obviously, that’s on me and the coaches and the players, and we have to fix it … It’s self-inflicted. We have to hold on to the ball. That’s exactly what I told them (his players).

“We’re going to learn from this. I can’t wait to get back in practice and get it right. But I’m even more confident now. You guys can all think I’m crazy, but it just shows me the type of group we have, and I can’t wait to play again.”

Jurkovec threw for 345 yards and two touchdowns, but he also turned the ball over three times.

Boston College: Turnovers doomed the Eagles after they came in with just three turnovers in their first four games. BC drove inside the Virginia Tech 30 on its first two possessions and fumbled both times, squandering opportunities to grab an early lead and take control of the game.

Virginia Tech: After getting most of their primary players back on defense (COVID and injuries), the Hokies finally got a solid performance from that unit, which had allowed 24 points in each of Virginia Tech’s first three games. Virginia Tech had forced three turnovers all season before forcing five against the Eagles.

The Hokies should move up in The Associated Press poll after the victory and home losses by Tennessee and Louisiana-Lafayette, two teams ahead of them in the poll.

Hooker missed the first game because of undisclosed reasons and then was cleared to play in the second game, but was held out. He made his 2020 debut at North Carolina last, coming off the bench and throwing two touchdown passes, while also rushing for a score. Hooker doesn’t like the label of “dual-threat quarterback,” but his ability to make defenders miss in the open field was a key to helping Virginia Tech rush for more than 300 yards for the third time in four games.

“I’m kind of considered a dual-threat quarterback because of how I can make plays,” Hooker said. “In my eyes, it’s just playing football, so I really don’t put a label on it.”

Virginia Tech: The Hokies play at Wake Forest on Saturday.