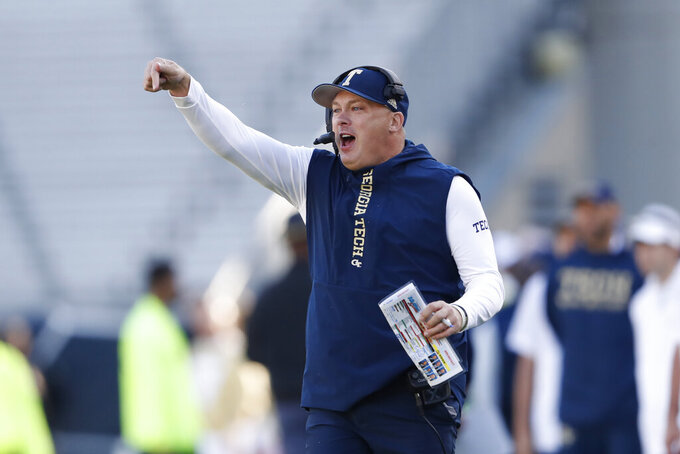 Georgia Tech head coach Geoff Collins reacts on the sideline in the first half of an NCAA college football game against the Pittsburgh Saturday, Nov. 2, 2019, in Atlanta. (AP Photo/John Bazemore)

ATLANTA (AP) — Virginia Tech’s offense is enjoying a second-half surge that has the Hokies in control of their ACC Coastal Division hopes.

The Hokies (6-3, 3-2 Atlantic Coast Conference) will play for their fourth straight ACC win when they visit Georgia Tech (2-7, 1-5) on Saturday. Virginia Tech is chasing Virginia in the Coastal Division, Georgia Tech is last in the division.

Virginia Tech can earn a spot in the ACC championship game by winning its last three games. The Hokies play Pittsburgh and Virginia the next two weeks.

Common threads to Virginia Tech’s resurgence are an improved running game and the move to sophomore Hendon Hooker as the starting quarterback. The Hokies are 4-0 in games started by Hooker.

The Hokies have rushed for at least 153 yards in each of Hooker’s four starts.

“We haven't done anything really new schematically,” Fuente said. “I do believe our execution level has increased and our techniques have gotten better.”

Georgia Tech has lost back-to-back games against Pitt and Virginia by a combined 15 points following an overtime win at Miami. The young Yellow Jackets are rebuilding on offense around freshman quarterback James Graham and sophomore running back Jordan Mason.

After completing only 3 of 13 passes with an interception in the 20-10 loss to Pitt, Graham completed 15 of 22 passes for career-best totals of 229 yards and two touchdowns in last week’s 33-28 loss at Virginia.

“He struggled a little bit, learned from it, which is a positive, and came back last week in the week getting ready to play Virginia with one of the top defenses in the country and prepared like you're supposed to prepare,” Collins said.

“I just want a full game out of the offense, passing the ball around and running around, a complete game where there aren't too many mistakes,” Mason said.

The Hokies have pledged to send retiring defensive coordinator Bud Foster out in style. They seemed to have moved closer to that goal with last week’s 36-17 victory against then-No. 22 Wake Forest. That win came with the emotions of Bud Foster Day before a sellout crowd. The visit to a different atmosphere at Georgia Tech may be a difficult challenge.

Hooker, who replaced mistake-prone Ryan Willis, provides a blend of passing and running, though he’s not quite a pure dual-threat player. Hooker has benefited from having Damon Hazleton back at wide receiver. Hazleton missed two games and most of a third with am injury. He still leads the Hokies with 22 receptions, including six for touchdowns.

Georgia Tech ranks last in the ACC with 150.8 yards passing per game. Hope for improvement is based on Graham and another freshman, wide receiver Ahmarean Brown. Graham has TD passes to Brown in three straight games.

The recent upswing by Virginia Tech’s running attack is important. The Hokies, who ran for 228 yards last week against Wake Forest, are 15-3 under Fuente when netting at least 200 yards on the ground. They are 25-6 when rushing for at least 150 yards under Fuente.