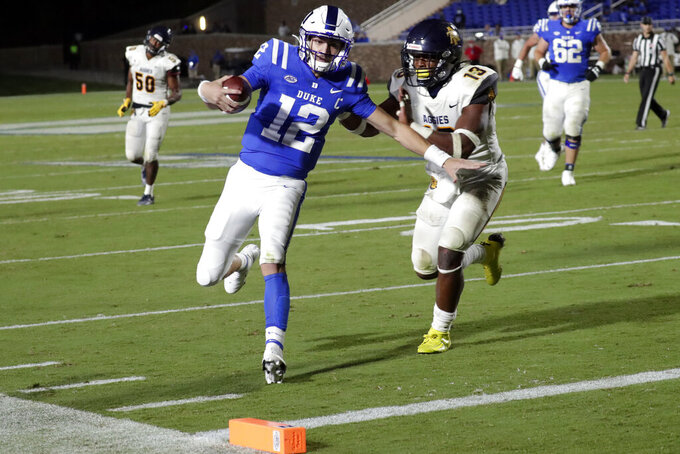 DURHAM, N.C. (AP) — No one was sure exactly how Gunnar Holmberg would handle his first year as Duke’s starting quarterback. He's offering some early positive signs entering Saturday’s visit from Northwestern.

The graduate student and captain is completing 71% of his passes for the Blue Devils (1-1), keeping the offense moving through running back Mataeo Durant while helping Duke avoid last year’s turnover-marred play.

“They see Gunnar’s commitment level,” Duke coach David Cutcliffe said. “It’s always been there. I think it’s more he leads through how other people respect and see his work ethic, which probably still is the greatest form of leadership there is.”

Duke was the only Atlantic Coast Conference school without a returning quarterback with starting experience. Holmberg has thrown for 498 yards and a touchdown with no interceptions.

He’s made one major mistake: a fumble on a hit as he ran toward the goal line in the loss at Charlotte But Duke followed with a turnover-free win against North Carolina A&T, something it failed to do last season while committing a national-worst 39 turnovers.

“I think when you go out there and it shows what you do from the practice field to the game field, you have a chance of having great ball security,” Holmberg said. “We’ve been good with that.”

Northwestern (1-1) has recovered a fumble in each of its first two games, a loss to Michigan State in Big Ten play and a home win against Indiana State. Last year the Wildcats ranked in the top 20 of the Bowl Subdivision ranks in forcing turnovers, fueled by safety Brandon Joseph – an Associated Press first-team All-American – tying for the national lead with six interceptions.

“They usually come in bunches – turnovers, that is,” Northwestern coach Pat Fizgerald said last weekend. “That’s kind of our goal each game, is to have three turnovers. So not to be at that point right now is something that we’ve definitely got to improve on.”

Some other things to know about Saturday’s Northwestern-Duke game:

The senior leads the Atlantic Coast Conference in rushing and the FBS ranks with those six TDs.

Northwestern held Indiana State to 31 yards rushing after giving up 326 in a season-opening loss to Michigan State.

Joseph showed last week he can be a dangerous punt returner in addition to top defender.

Raymond Niro III also had a good outing against Indiana State, returning two for 55 yards. Fitzgerald wouldn’t say who would be the primary punt returner against Duke.

Evan Hull is off to a decent start as Northwestern’s No. 1 running back.

Thrust into the role after Cam Porter suffered a season-ending lower-body injury in camp, the sophomore ranks fifth in the Big Ten in yards per game (106.5) while averaging 6.9 per carry. Hull ran 22 times for 126 yards and two touchdowns against Indiana State after going for 87 on just nine attempts against Michigan State.

“Since Day 1 since he’s gotten here, he’s just worked and worked and worked,” quarterback Hunter Johnson said. “I’m really happy for him. He’s been able to show that on the field. He’s an energy guy on the team. He comes in everyday working and ready to go.”