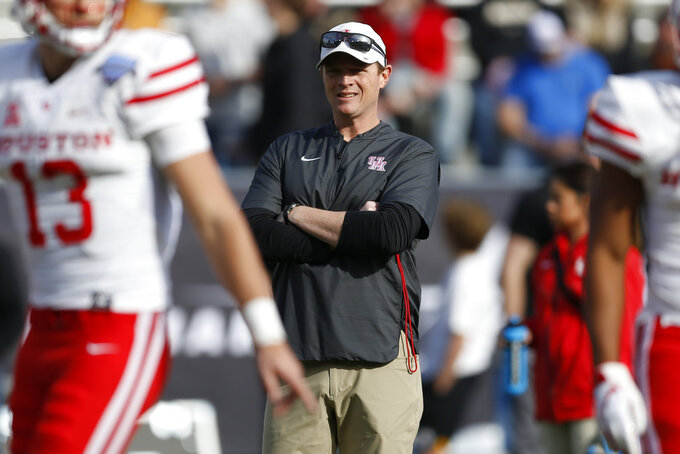 The school announced the move a little more than a week after the Cougars were trounced in a 70-14 loss to Army in the Armed Forces Bowl .

Houston (8-5) lost four of its last five games after starting 7-1 and earning a ranking in the AP Top 25 for one week in late October. On Dec. 22, the injury-plagued Cougars suffered their most-lopsided loss in their 27 bowl games, and their biggest loss overall since a 66-10 loss at UCLA during the 1997 regular season.

"After a thorough evaluation of our football program, it is my assessment our future opportunities for success are better addressed by making this very difficult decision now," Houston athletic director Chris Pezman said in a statement.

In Applewhite's first season, Houston went 7-5, capped by a 33-27 loss to Fresno State in the Hawaii Bowl.

Applewhite was Houston's fifth coach in the past decade, following stints by Art Briles, Kevin Sumlin, Tony Levine and Herman.

Possible replacements could include West Virginia coach Dana Holgorsen, who served as Houston's offensive coordinator in 2008 and 2009.

"While the immediate future may be challenging, our future at UH is very bright," Pezman's statement said. "We've made many sizable improvements over the past five years, and I look forward to enhancing our future success through the hiring of our next head coach. At this time, we have already begun the search process for our next head coach and will not comment further until the search is concluded."

The move comes after Houston lost offensive coordinator Kendal Briles, who left the Cougars to take the same job at Florida State after the bowl loss.