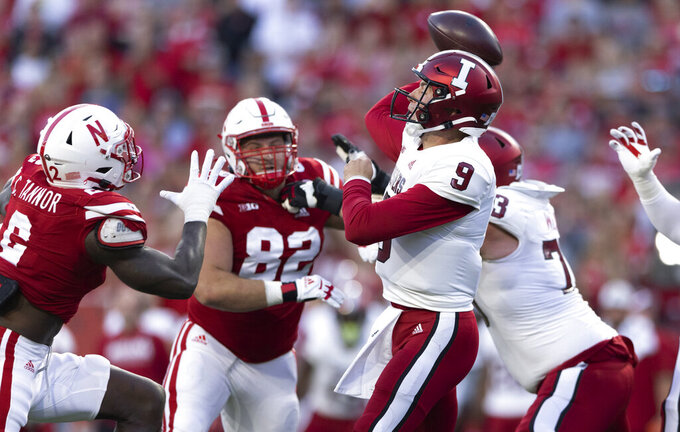 LINCOLN, Neb. (AP) — Casey Thompson threw for two touchdowns and ran for another and Nebraska beat a Football Bowl Subdivision opponent for the first time in 364 days with a 35-21 victory over Indiana on Saturday night.

Thompson, benched for a series in the first half and shaken up on a big hit in the third quarter, threw a 71-yard touchdown pass to Trey Palmer early in the fourth to break a 21-all tie and followed with a 1-yard run to give the Cornhuskers a two-score cushion.

The win ended a nine-game losing streak against FBS opponents — the Huskers' previous one was against Northwestern on October 2, 2021 — and was Mickey Joseph’s first since he was named interim head coach following the firing of Scott Frost on Sept. 11.

“I love Mickey. I want to ride with Mickey,” defensive end Garrett Nelson said. “He was put in a tough situation and he’s flourished in that spot.”

The Huskers (2-3, 1-1 Big Ten) broke open the game in the fourth quarter as Thompson came through with big plays during what had been an up-and-down performance.

Palmer had a couple steps on Phillip Dunnam as he ran his post pattern on a third-and-9 and caught the ball in stride for a 28-21 lead with 13:43 left.

“My number got called. I made the play. That’s what I’m here for,” Palmer said.

The touchdown gave Palmer the first 100-yard receiving game of his career. The fourth-year player, who transferred from LSU after last season, finished with eight catches for 157 yards.

After Indiana (3-2, 1-1) went three-and-out, Thompson led a 12-play, 54-yard drive that chewed more than six minutes off the clock. He completed three short passes and handed off to Anthony Grant seven times for 31 yards before he ran in for the final margin. Grant finished with 136 yards on 32 carries.

The Huskers held Indiana to 290 yards and had three sacks and six quarterback hurries in Bill Busch's first game as interim defensive coordinator.

“We're finally realizing what we are as a defense,” Nelson said. “Great win. We showed what we can do. Got to carry that over to the coming weeks.”

Thompson gave the Huskers a scare in the third quarter when he held his right shoulder area after James Head Jr. put a big hit on him. Chubba Purdy, whose fumble in the end zone led to an Indiana touchdown in the first half, took over for one play on the next series and then Thompson returned.

Thompson was 18 of 27 for 270 yards with an interception to go with his two TD passes. Indiana's Connor Bazelak was 22 of 44 for 223 yards with a touchdown and interception.

The teams combined for 23 penalties for 202 yards, one of the most flag-filled FBS games of the season.

Indiana scored twice in the final 3:09 of the second quarter to go into halftime tied 21-all.

Indiana: The Hoosiers were hamstrung on offense because their top two receivers, Cam Camper and D.J. Matthews, were out with injuries.

“Obviously, they’re huge parts of our offense,” Bazelak said. “So it was tough not having them, but we had some guys step up and we made some plays but we've got to find ways to make more.”

Nebraska: The Huskers were able to win despite spurts of undisciplined play and periods of stagnant offense.

Thompson got chewed out on the sideline by enraged offensive coordinator Mark Whipple after taking a drive-killing sack in the second quarter. Thompson was on the bench when Nebraska got the ball back at its 10.

Whipple was sending Thompson a message, but it came with a cost. On third down Purdy fumbled while a blitzing Louis Moore began pulling him down, and Myles Jackson recovered for a TD.

Nebraska’s Chris Kolarevic blocked James Evans’ second-quarter punt and Malcolm Hartzog picked up the ball with a clear path to the end zone for a 30-yard touchdown. It was Nebraska’s first blocked punt returned for a touchdown since 2009.

Nebraska offensive lineman Turner Corcoran was ejected late in the second quarter after getting called for unnecessary roughness and unsportsmanlike conduct on consecutive plays.

Corcoran charged into the pile after Thompson's facemask was pulled while going down, negating the penalty on the Hoosiers. On the next play Corcoran punched Aaron Casey while the linebacker was on the ground.

Indiana: Hosts No. 4 Michigan on Saturday.