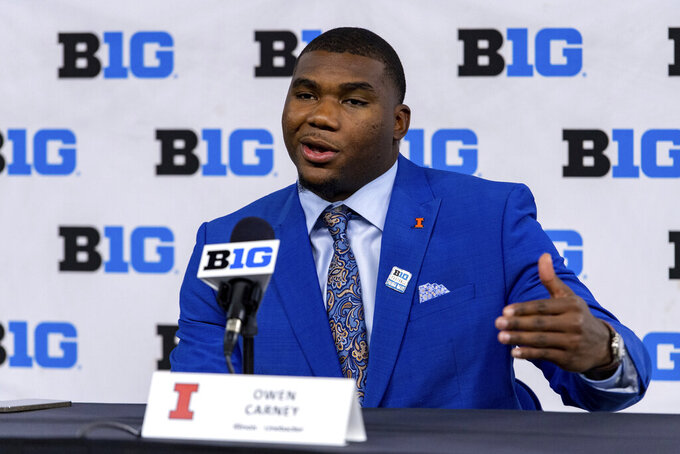 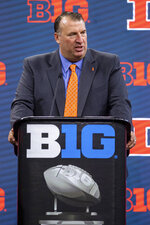 CHAMPAIGN, Ill. (AP) — With a new coaching staff and a host of new players, Illinois enter the season as a bit of a mystery in the Big Ten Conference.

The biggest question is what kind of team can new coach Bret Bielema assemble and how will it differ from that of his famous predecessor, Lovie Smith?

Bielema, the former Wisconsin coach, replaced Smith at the end of last season. Smith went just 17-39 overall in his five-year tenure and 10-33 in the Big Ten. Illinois did make a bowl appearance in 2019.

Bielema has 24 years of college coaching experience, including seven seasons as Wisconsin’s coach (2006-12). The Badgers won three straight Big Ten titles under his tutelage (2010-12), sporting a 68-24 record while playing in six bowl games.

With a staff that includes offensive coordinator Tony Peterson and defensive coordinator Ryan Walters, and a returning veteran quarterback in Brandon Peters, it’s unclear exactly what type of team will take the field in the opener against Nebraska on Aug. 28.

Perhaps the biggest surprise so far is Isaiah Williams moving from quarterback to wide receiver, a move designed to take advantage of his speed and athleticism. Speedy defensive back Marquez Beason also switched to wide receiver.

The addition of Williams and Beason to the receiving corps illustrates a need to provide Peters with more targets in what many see as a more run-oriented offense.

Bielema was noted for being heavily reliant on the running game at Wisconsin. He certainly has talent available at Illinois, including Chase Brown and Chase Hayden. Oft-injured Mike Epstein is back and making progress, Bielema said.

“We’re incredibly deep at the running back position this year,” Peterson said. “I’m really glad to see Mike back.”

UP IN THE AIR

Illinois averaged only 152 yards per game passing (114th of 130 FBS teams) and scored just 10 touchdowns through the air last year. Josh Imatorbhebhe led the pack with 42.4 yards per game and three touchdowns and he's gone.

Peters threw for 439 yards and three TDs last season. He played a limited amount of games due to injuries and COVID-19 protocols. The rust showed, as Peters occasionally missed open receivers and made some questionable throws.

“Last year just didn’t feel right,” Peters said. “I stuck around (this year) because I wasn’t quite ready to move on.”

Illinois isn’t bringing back a lot of production on the receiving end. Donny Navarro, Brian Hightower, and Casey Washington are the only receivers with more than five catches per game.

This all helps explain the moves for Beason and Williams, who also proved to be a talented runner as Peters’ backup at quarterback last season.

“It’s definitely a whole different feeling,” Williams said, referring to his position switch to wideout. “Right now, I’m working on trying to get better every day.”

Senior linebacker Jake Hansen has 29 career starts under his belt. He battled injuries throughout his career, missing the entire 2017 season with a knee injury. He also missed the final four games of the 2019 season with a back injury but through it all, still leads the nation in takeaways with 14 since 2019.

“We’re in the process of looking at the best 11 guys to give us our best shot on Saturdays,” Walters said.

A potential breakout star this year is tight end Daniel Barker, heading into his fourth season.

Illinois opens the season with two home games, hosting Nebraska on Aug. 28 and UTSA on Sept. 4. The Illini then travel to Virginia. All eyes are on Oct. 9, when Wisconsin visits to meet their old coach’s revamped Illinois team. The schedule includes back-to-back trips to Minnesota and Iowa, a visit to Penn State and a home game against rival Northwestern.