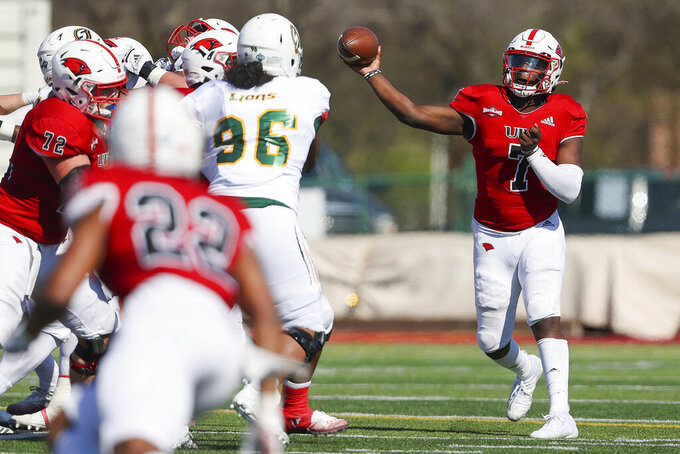 Cameron Ward has put up numbers that would be impressive in any freshman’s first collegiate season.

The quarterback at Incarnate Word in San Antonio, Texas, has 14 touchdown passes and two interceptions in the first three games of his college career.

In a 56-45 victory over Southeastern Louisiana, ranked No. 22 in the STATS FBC Top 25, Ward completed 26 of 47 attempts for 407 yards and a school-record six touchdowns. He also ran for 38 yards and his second touchdown of the season, helping the Cardinals climb to No. 13 in the national rankings.

“There’s really not a throw that he can’t make on the field to be honest,” Cardinals quarterback coach Mack Leftwich said. “The arm strength jumps off the tape at you, and then really, he has an unbelievable ability to see space and that’s huge in our offense.”

Incarnate Word runs a spread offense, and Ward benefitted from essentially two fall camps — one before the season was cancelled y the pandemic, another before a scheduled December game with Arkansas State was scrapped.

"That was huge for him," Leftwich said, because in high school, Ward played in a run-oriented Wing-T offense, throwing just a few passes per game.

In his first two starts, Ward threw four touchdown passes in each game, each time to four different receivers, and he’s averaging 351 passing yards. In all, eight different players have been on the receiving end of his scoring throws.

“For him to be able to come in, a true freshman, and pick up the system with somewhat limited reps and do as well as he has been is a testament to his ability to handle a lot offensively, and his natural ability to see space and make all the throws on the field,” Leftwich said.

He also beat out a quarterback, rising junior Jon Copeland, who had 11 300-yard passing games and was just 143 yards shy of the program's career mark.

None of it, the coach said, appears to have gone to Ward's head.

“He’s kind of got a goofy, funny personality and I don’t think in fazes him," Leftwich said. “He’s the all-time leading scorer at his high school in basketball. Success is not something that’s new to him. ... He’s a humble kid.”

UC Davis set school records for total yards (768) and points in a 73-24 victory over Cal Poly. Hunter Rodrigues completed all 14 of his first-half pass attempts and finished 19 of 23 for 265 yards and three touchdowns. Backup QB Trent Tompkins ran the ball twice, both for touchdowns, including a 86-yarder.

Sam Houston is averaging nearly 59 points and doing it against ranked opponents.

The Bearkats (3-0, 3-0 Southland Conference), ranked fifth in the STATS FCS Poll, opened the season with a 43-38 victory against Southeastern Louisiana, then ranked No. 18, and followed with a 71-17 victory against Nicholls, which came into the game ranked No. 7.

Last week, Eric Schmid ran for four touchdowns and threw for two more as Sam Houston made quick work of Lamar, 62-7. Schmid completed 19 of 29 attempts for 343 yards with TD throws of 35 and 41 yards to Jequez Ezzard, who also returned a punt 80 yards.

The Bearkats play next at Northwestern State on Thursday night, April 1.

After being not being able to play the past two weekends because of virus protocols within its program, top-ranked James Madison (3-0, 3-0 Colonial Athletic Association) is scheduled to play Saturday at William & Mary (1-1, 1-1). ... Maine's Joe Fagnano and Andrew Miller have teamed up for three touchdown passes two weeks in a row, helping the Black Bears (2-1, 2-1) join the STATS Top 25 at No. 25. It gives the CAA seven teams in the top 25, tied for the most in the league's history. ... Arkansas-Pine Bluff got four touchdown passes from Skyler Perry in a 48-21 victory against Grambling State. The victory gave the Golden Lions their first 2-0 start since 2000.