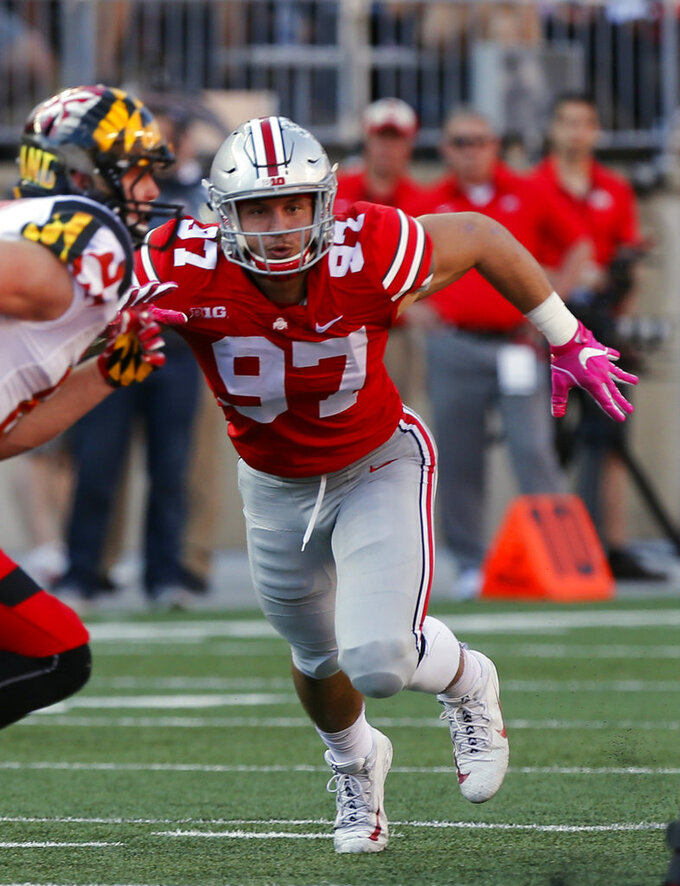 FILE - In this Oct. 7, 2017, file photo, Ohio State defensive end Nick Bosa plays against Maryland during an NCAA college football game, in Columbus, Ohio. Bosa’s college football career is over. The injured All-American defensive end intends to withdraw from Ohio State to spend time rehabilitating and training for an NFL career. He is expected to be a first-round draft pick. No. 2 Ohio State made the announcement on Tuesday, Oct. 16, 2018.. (AP Photo/Jay LaPrete, File) 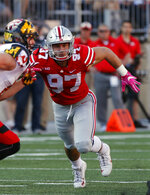 COLUMBUS, Ohio (AP) — Injured defensive end Nick Bosa has decided to leave school to focus on getting ready for the NFL draft in the spring, Ohio State said Tuesday.

The junior All-American from Fort Lauderdale, Florida, already had four sacks this season when he suffered a core muscle injury on Sept. 15 in the third game of the season. He had surgery five days later, and no timetable was set for his return to the team.

Considered one of the best players in college football, Bosa had left no doubt that he would leave school after this season to enter the draft. He planned to follow the same path as his older brother, Joey, who left Ohio State a year early and now plays for the Los Angeles Chargers.

Nick Bosa had tied his career high of five tackles twice in the first three games this season, and he was leading the team in tackles with 14, including six for losses.

That came to an abrupt halt when he went down early in the third quarter against TCU in Arlington, Texas, and had to be helped to the locker room.

Coach Urban Meyer said the conversation with Bosa was emotional, but "I can't say I was surprised."

"I was hopeful that Nick would be able to return to play again for us," Meyer said. "I know this was an extremely difficult and emotional decision for Nick and his family, and I wish him well as he moves on to get himself 100 percent healthy and ready for his next chapter."

Ohio State's defense hasn't been the same since Bosa's departure. The unit has dealt with other injuries, including to Bosa's replacement, Jonathan Cooper, and has shown a weakness for surrendering big plays.

Bosa was dominating from the start of his Ohio State career.

"I want to thank Nick for the remarkable efforts he gave for this program," Meyer said. "He is a first-class young man who we have been honored to coach."

Past and present teammates were supportive on social media.

"One of the best teammates and competitors I've been around," tweeted former Ohio State and current Cincinnati Bengals defensive end Sam Hubbard . "Know this was a tough decision, but made the right one."

Defensive end Chase Young , who was starting opposite Bosa on the Ohio State line, tweeted: "Get money big brotha ... love as always."