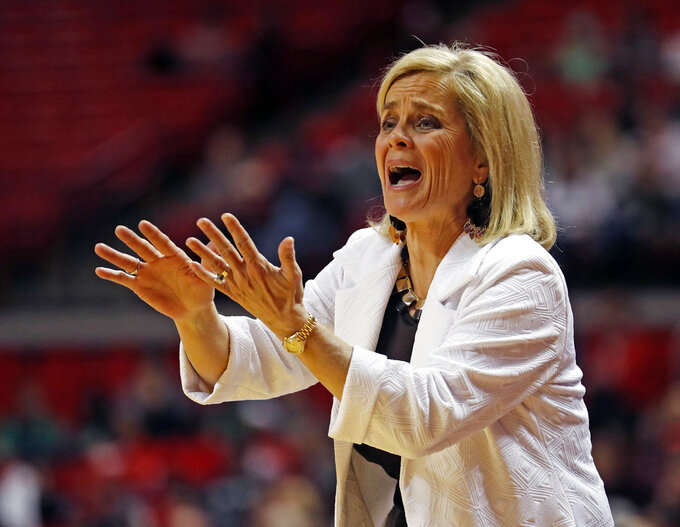 Baylor coach Kim Mulkey reacts to a call by the referees during the second half of an NCAA college basketball game against Texas Tech, Sunday, Jan. 6, 2019, in Lubbock, Texas. (Brad Tollefson/Lubbock Avalanche-Journal via AP) 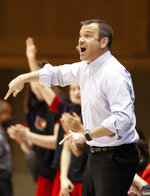 NEW YORK (AP) — For the first time in a long time, a handful of teams could make an argument to be No. 1 in The Associated Press women's basketball poll.

Over the past decade there really hasn't been too much debate each week over who should hold the top spot. Only five teams have been No. 1 since the preseason poll in 2008 and most of the time they were the unanimous choice or close to it. College football has had 14 different teams ranked No. 1 over that same span and men's college basketball has had 21.

UConn had been the clear No. 1 since routing Notre Dame on Dec. 3, before losing to No. 8 Baylor last Thursday. That opened the door for a new top team Monday and a debate over which team it should be. It wasn't an easy decision for the voters and in the end, Notre Dame edged Louisville by seven points for the top spot .

It's the closest margin for the top two teams in the poll in over a decade. Third-ranked UConn was only 14 points behind Notre Dame, and No. 4 Baylor was 28. Four teams received first place votes — the first time since 2014 that has happened.

"Week 10 of this year's poll was the most difficult in my 10-year voting history. I've been voting on the poll since 2008-09 and it took me 5½ hours to determine how to shape the top five, next five and the last five," ESPN analyst Deb Antonelli said. "Conference play creates another level of study and research. There are more teams capable of winning the NCAA championship because there is not one dominant team. The NCAA committee will have unprecedented pressure to get it right with sending in the four regionals because this is the most balance I can remember in my 30 years covering the game and certainly my 10 years voting in the AP poll."

The 30-member national voting panel submitted ballots after the last games Sunday night, and as the votes came, it just so happened that all four of the top teams held the No. 1 spot before the final poll was tallied and the Irish were in the top spot. The Huskies were actually the top team for an hour without having a first place vote.

Even with the loss to Baylor, UConn still had a valid argument to be the top team. The Huskies hadn't lost a regular-season game in four years and that very impressive road win over the then-No. 1 Irish. That was enough to keep UConn first on Knoxville News Sentinel writer Dan Fleser's ballot, as well as two other voters.

"I knew after the Baylor result it would be tricky," said Fleser, who has voted for the Top 25 every year since it became a writer's poll in 1994-95. "It came down to UConn's win at Notre Dame was the biggest quality win of the year. I was conflicted on what to do, so decided they should stay at No. 1."

Fleser said that with the Louisville-Notre Dame game Thursday, he would definitely consider moving the winner to the top spot next week.

The Irish have been No. 2 in the poll since losing to UConn and have dominated their opponents. It was easy to see why 12 voters moved them up to No. 1, including Carly Nevis, who works for WDTV in West Virginia.

"After losing to UConn, Notre Dame has beaten teams by an average of 33.5 points," Nevis said. "The Irish also have wins over five teams that are ranked or have been ranked and have played a much stronger schedule."

Louisville is the only one of the top four teams without a loss. The Cardinals have a few good wins this season, including victories over Arizona State, Kentucky, and Central Michigan. They don't have a marquee victory yet. That could change Thursday in South Bend, Indiana.

"They deserved it based on being undefeated, style of play, eye test, depth, guard play, experience, coaching and Asia Durr," said Antonelli, who was one of 10 voters to have the Cardinals first.

Baylor's case for being No. 1 is as simple as accomplishing something no team has done in the regular season since Stanford in 2014. The Lady Bears' lone loss came by five points at the Cardinal on Dec. 15. Five voters picked the Lady Bears first. Had Baylor finished No. 1, it would have been an unprecedented jump, especially 10 weeks into the season.

The biggest leap a team has made to No. 1 in the past decade was Stanford moving from fourth to first in 2012. That was early in the season and happened after the Cardinal ended Baylor's 42-game winning streak that season.

Still, the victory over UConn was enough to convince voter Scott Richey of The News Gazette to move Baylor up to No. 1 from 10 the week before.

"UConn losing certainly had me thinking about the top of ballot more than usual," he said by phone Monday night. "I recalled the instructions saying it was OK to make bold moves. A win over UConn in the regular season is a rarity."