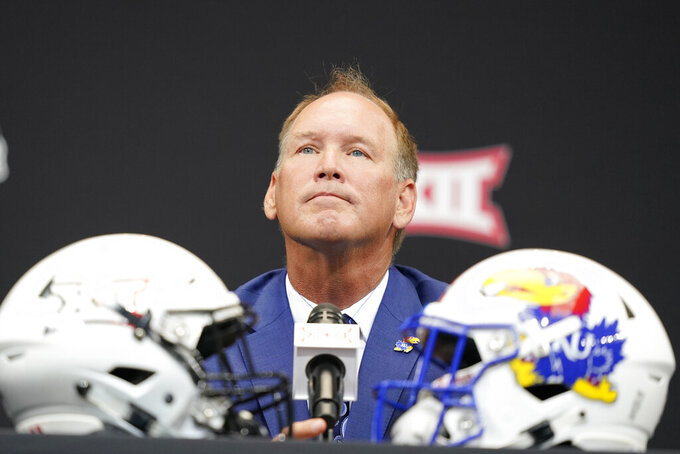 FILE - Kansas head coach Lance Leipold listens to a question from a reporter at the NCAA college football Big 12 media days in Arlington, Texas, Wednesday, July 13, 2022. Leipold took over the football program at Kansas after a winless season and a somewhat scandalous departure of his predecessor, Les Miles. And while the long-time small-school coach won just twice in Year 1, he is full of optimism heading into fall camp this season. (AP Photo/LM Otero, File)

Line: Kansas by 27 1/2, according to FanDuel Sportsbook.

Kansas coach Lance Leipold begins Year 2 of his rebuild against Tennessee Tech, which won just three games a year ago in the Football Championship Subdivision. The Jayhawks then jump into Big 12 play against West Virginia before tougher out-of-conference games against Houston and Duke, making a win over the Golden Eagles imperative. Tennessee Tech has never beaten a Big 12 opponent in three tries and is 2-36 against Bowl Subdivision teams with its last win in 1980.

Tennessee Tech: QB Jeremiah Oatsvall, who transferred from Memphis after four seasons with Austin Peay, should test the Kansas pass defense. Oatsvall threw for 3,495 yards with 44 touchdowns with the Governors.

Kansas: QB Jalon Daniels won the starting job early in fall camp after a strong finish to last season, when he helped Kansas upset Texas on the road. He wound up throwing for 860 yards and seven touchdowns with three interceptions while also giving the Jayhawks some running ability. Daniels will be helped by four returning starters on the offensive line.

Tennessee Tech has not had a winning season since 2011, when it went 7-4 and made its lone appearance in the Championship Subdivision playoffs. Kansas has not had a winning season since 2008, when it finished 8-5 with a win in the Insight Bowl. ... Golden Eagles LB Seth Carlisle has 232 career tackles. ... The Jayhawks bring back nine starters on each side of the ball and returning players have combined for 271 starts, making them one of the most experienced teams in the Big 12. They also have 14 transfers with 107 combined starts among them. ... Leipold is 14-2 in season openers, including 6-2 at the Division I level with Buffalo and Kansas. ... Jayhawks FS Kenny Logan Jr. had a team-high 113 tackles last season, the most in the nation by a safety. ... Kansas C Mike Novitsky did not commit a penalty or allow a sack in 799 snaps last season. ... Jayhawks RB Devin Neal ran for 707 yards and eight TDs last season, including 143 yards and three scores against Texas.