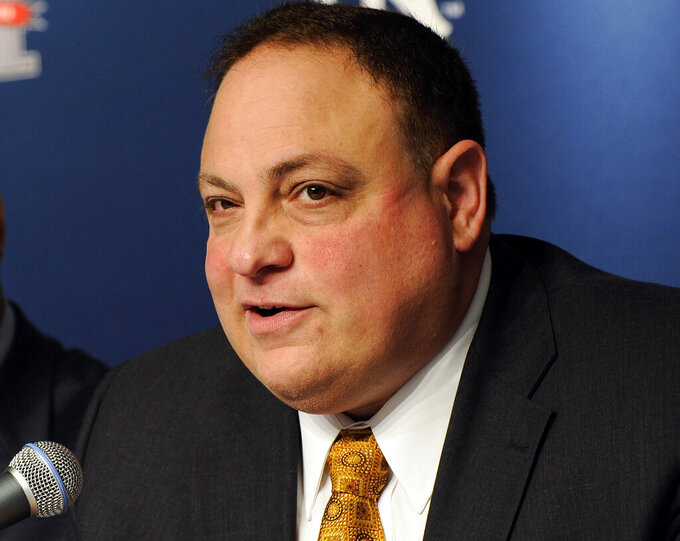 FILE - In this Sept. 30, 2009, file photo, Big East commissioner John Marinatto speaks at a news conference in New York. Marinatto, who was commissioner of the Big East during a tumultuous period of conference realignment across college sports, had died. He was 64. Providence College, Marinatto's alma mater and the school where he began a long career in college sports, said he died Saturday, June 12, 2021. A cause of death was not immediately released. (AP Photo/Stephen Chernin, File)

John Marinatto, the Big East commissioner during a tumultuous period of conference realignment across college sports, has died. He was 64.

Providence College, Marinatto's alma mater and the school where he began a long career in college sports, said he died Saturday. The cause was not disclosed.

Marinato was living in the Providence, Rhode Island, area at the time of his death.

The Providence native began working in sports administration at his hometown school as a student in 1975 and was mentored by future Big East Conference commissioners Dave Gavitt and Mike Tranghese.

“In 48 years, we never exchanged a cross word,” Tranghese said. "And I take no credit for that. It's hard to go through life and not have enemies. John Marinatto may be the only person I know who didn't have enemies. He was extremely well liked and well respected.”

Marinatto also worked under current New York Islanders President Lou Lamoriello while at Providence and was sports information director when Rick Pitino was basketball coach of the Friars.

“He was a really hard worker. An outstanding lieutenant and leader,” said Dan Gavitt, Dave Gavitt's son and the vice president of basketball for the NCAA.

Marinatto had plans to become a Catholic priest when he was young, but instead followed a calling to college athletics. He rose from SID to athletic director at Providence and held that role for more than a decade. He joined the Big East in 2002 as a senior associate commissioner.

“He loved working, but he loved being in the background,” Tranghese said.

Tranghese credited Marinatto with being the architect of the Big East's reconstruction in the early 2000s after the first round of departures nearly wrecked the conference.

The result was a super conference that became a powerhouse in basketball and still strong enough to be considered one of the top college football leagues.

Marinatto followed Tranghese and became the third Big East commissioner in 2009. Not long after, the conference started to splinter again and Marinatto was unable to hold it together.

“He carried that burden around with him the rest of his life,” said former Big East Associate Commissioner Nick Carparelli, now the executive director of Bowl Season, an organization that promotes and supports postseason college football games.

Marinatto resigned in May 2012.

“I had many conversations with him because that was absolutely not the case," Tranghese said. “The deck was stacked. There were circumstances totally out of his control.”

Dan Gavitt said: “It speaks to John's sense of duty and responsibility that he felt that personally he allowed realignment to happen on his watch.”

Marinatto became somewhat reclusive. Even many of his close friends and colleagues from his time in college sports did not see him often.

“He didn't keep in touch with a lot of people and I think that's for the most part because when people reached out to him it was to see how he was doing and he didn't really want to talk about that,” Carparelli said. “But if you ever called him and told him that you had a problem or needed his help, he called you back immediately and stayed by your side until the problem was resolved. Very selfless individual. And I'll miss him dearly.”

Marinatto never married. He is survived by a brother.