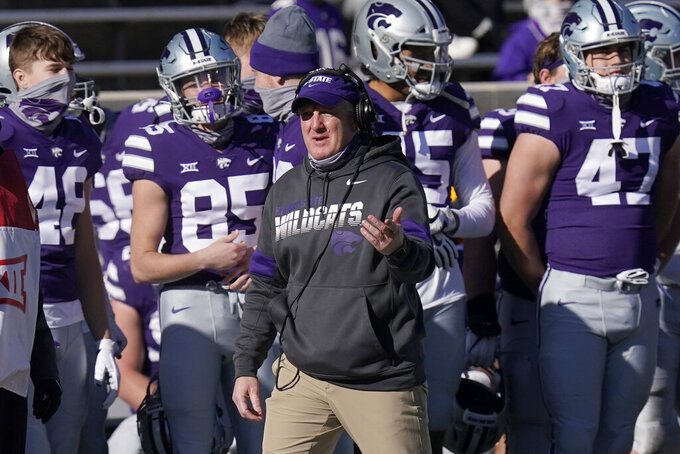 MANHATTAN, Kan. (AP) — Skylar Thompson was a mere 10 days into training camp this fall when the Kansas State quarterback acknowledged that he was having the best, most productive time of his entire college football career.

Thompson was recruited by then-coach Bill Snyder in 2015, signed the following spring and spent his first fall camp redshirting with the Wildcats. He moved into the starting job in 2017, helping engineer an upset of Oklahoma, and had remained the starter when Snyder retired and Chris Klieman was hired away from North Dakota State.

His already lengthy career should have ended last season, but after another upset of the Sooners in Week 2, Thompson hurt his shoulder and played in part of just one more game. Thompson was able to take advantage of an extra year of eligibility afforded all players during the COVID-19 pandemic to return for a sixth season.

So, that makes six fall camps. And this has been the best yet.

“I feel like guys have been engaged,” Thompson explained ahead of Saturday's season opener against Stanford at AT&T Stadium in Dallas. "There's been high energy, fighting through adversity. This is the time where you find out what your team is made of — we're sore, we're tired, it's kind of turning into a grind.

“We've past the honeymoon stage of it just starting,” he added, “so this is where you find out what you're made of. Who's going to rise to the occasion? How are we going to respond to adversity and whatnot?"

Thompson certainly knows how to deal with adversity.

He was banged up much of his sophomore season, appearing in 11 games with 12 starts, a byproduct of all the running he did. He spent plenty of time in the trainer's room the following season, too, though he wound up starting every game. And last year, the injury to his throwing shoulder could have ended Thompson's career entirely.

“Knock on wood that Skylar stays healthy so he can have a great senior year,” Klieman said, “but we have the utmost confidence to play Will (Howard) at any time, whether that's Skyler nicked up or a situation dictates that.”

Thompson has a track record of playing at a high level. At least, when he's been healthy.

He threw for 203 yards and three scores and ran for 93 yards and another touchdown in beating No. 13 Oklahoma State as a freshman. He had another four-TD game against No. 25 Iowa State as a sophomore, and big performances against the Sooners and the Cyclones his junior year gave the Wildcats a pair of wins over ranked opponents and a spot in a bowl game.

It was his performance against Oklahoma last year, though, that showed what Thompson is capable of doing.

With the Wildcats heavy underdogs after a stunning season-opening loss to Arkansas State, he shredded the third-ranked Sooners in Week 2. Thompson finished with 334 yards and a touchdown through the air, ran for three more scores and, by the time the final seconds ticked off the clock, had rallied Kansas State to a 38-35 upset.

“Skylar is such a fiery competitor,” Kansas State tight end Daniel Imatorbhebhe said. “He hates losing, he hates not doing things with a spirit of excellence, and I’m kind of the same way. So we bounce off each other, we feed off each other, we lift each other up. Getting to play with him has been fun, and we both have this mindset like, ‘Man, we’re trying to finish this thing the right way, affect the team in this way that puts us over the top.’”