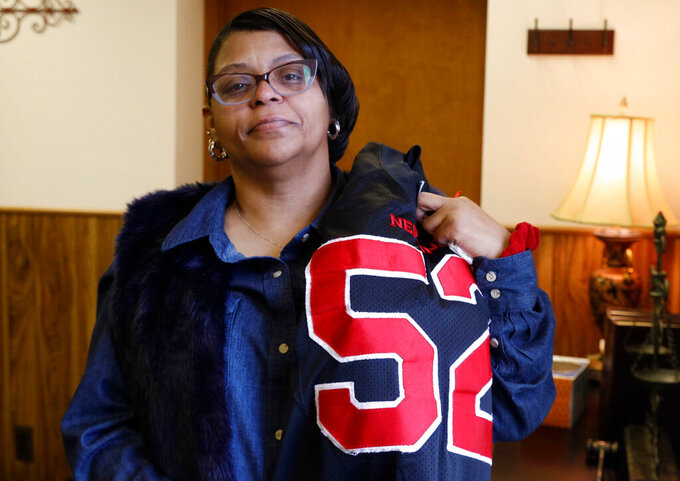 In this Feb. 13, 2019 photo, JoAnne Atkins-Ingram drapes her son's old Neptune High School football jersey over her shoulder in her attorney's office in Avon-by-the-Sea, N.J. Her 19-year-old son, Braeden Bradforth, died in August 2018 about an hour and a half after football practice at Garden City Community College in Garden City, Kan. New Jersey's U.S. House delegation is seeking an independent investigation into Bradforth's death. (Doug Hood/The Asbury Park Press via AP)

GARDEN CITY, Kan. (AP) — A Kansas community college released a summary of its internal review into the heatstroke death last year of a football player who collapsed after the first day of practice, saying the coach reported that players were provided with water.

But some Garden City Community College players told KCUR radio that they were denied water during conditioning drills on Aug. 1, when Braeden Bradforth, 19, of Neptune, New Jersey, died at a hospital after being found unconscious outside his dorm room.

"When we first started, I thought they were crazy," said Johnny Jean, a player from Florida. "I ain't never been at practice when they said we couldn't get water."

The school did not immediately respond Friday to a request for comment on the players' claims.

Rep. Chris Smith, a New Jersey Republican, called the college's summary "a sham" and called for an external, independent investigation.

"The summary of the grossly inadequate and incomplete internal review lacks answers to key questions about the events of August 1 that, nine months later, still need to be answered," Smith said in a statement.

The college said in its summary that the temperature was 84 degrees at the start of practice with 10 football coaches in attendance that day. Head Trainer T.J. Horton said 60 gallons of water, 10 ice towels and an ice chest with injury ice and bags were on hand. Trainers had large Gatorade containers on the sideline and each student helper had six water bottles in their carrier, according to the summary.

In its review, the school said the team was divided into two groups. While one group began drills, the other group waited on the sideline or bleachers. "They were being provided water, assistance with stretching, and waiting for their turn on the field," according to the summary.

But Smith cited media reports indicating water may have been withheld from players.

"Saying there was water nearby doesn't answer that claim," Smith said. "It only furthers the concern."

But the school's internal review said neither the head trainer nor the head coach ever noticed him "drop a knee to the ground, or complain about the drills."

The practice began at 7 p.m. with a workout that consisted of 36 50-yard sprints, with 30 seconds of rest between each sprint, according to the summary. Practice ended shortly after 9 p.m., with a team meeting immediately following in a lecture hall across from the football field.

As they were walking from the football field, coach Caleb Young noticed Bradforth stumbled a little before regaining his balance. Young told him, "Hey, you're good. Let's go," according to the report. Bradforth reportedly responded back, "Yeah, I'm good. I'm good."

Bradforth started walking toward the dorms, and shook his head when Young asked him if he was quitting. At the team meeting, Young told another coach that Bradforth had apparently quit the team and walked to the dorms.

A lawyer for Bradforth's family, Jill Greene, said in a letter to the college's attorney that the college's internal report "makes a mockery of Braeden's death."

"It's self-serving fluff," she told KCUR.

The college said it has taken several steps as a result of its review, including hiring an additional trainer and a conditioning coach, training all coaches in CPR and first aid, and developing a protocol to recognize and treat heat-related illnesses.