Kansas embarks on search for another new football coach 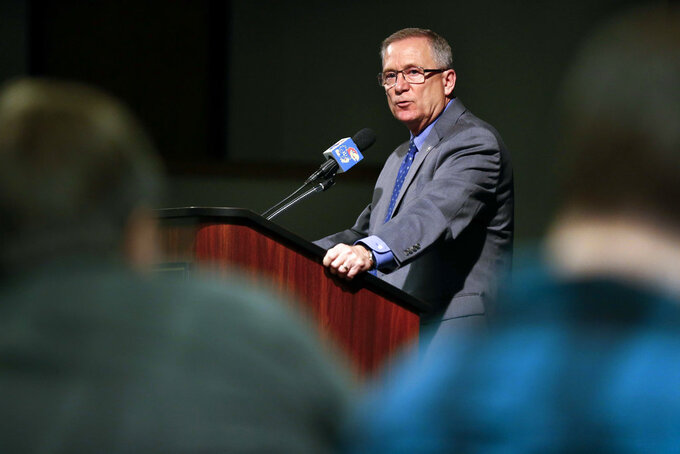 LAWRENCE, Kan. (AP) — Jeff Long made the challenge facing him in hiring the next football coach at Kansas clear when the Jayhawks' athletic director mentioned several times one obvious if oft-overlooked fact about picking the right candidate to lead his program.

"The most difficult part," Long said late Sunday, hours after firing fourth-year coach David Beaty, "is trying to figure out who is really interested in your job and who is just playing the game."

Long heard from several coaches and agents after informing Beaty he would be let go after the season. In acknowledging that some may merely use interest in Kansas to earn a raise or promotion elsewhere, Long also admitted there isn't a whole lot of shine to the job.

The program hasn't had a winning season or reached a bowl game since 2008. Fan apathy is at such low levels that more than half of the roughly 15,000 fans who turned up Saturday were there to support Iowa State. And the resources the school has made available for football are dwarfed by its Big 12 rivals.

The last of those is something Long promised to address.

He said Kansas has low-balled its pay to coaches over the years, and that the miserly approach extends far beyond the head coach. Long said the program has about 15 fewer staff members than the average Power Five program — the behind-the-scenes quality control coaches, recruiting coordinators and other support staff — and that the pay of those on staff is also far too low.

So, along with hiring a new coach, Long wanted to make it clear that the priorities for Kansas are about to change. He is putting a massive, $300 million renovation to Memorial Stadium "on simmer," Long said, and instead redirecting resources toward building up the program.

"People understand we have to make a great commitment, and that commitment is financial resources, plain and simple," Long said. "Right now we have to invest in our program rather than our stadium."

Regardless of who it is, the new coach will find a program in better shape than Beaty did.

The roster is the most competitive it's been in years, highlighted by promising young players such as running back Pooka Williams and defensive back Corione Harris. The school recently completed work to its offices and locker rooms, and a sorely needed indoor practice facility is under construction.

And while the football team may always be overshadowed by the Jayhawks' powerhouse men's basketball team, Long believes that having one successful program doesn't preclude them from having another.

"My expectation," he said, "is that the football program should be bowl-bound on a regular basis."

Long wants someone with major college experience, something that Beaty — a career assistant and former offensive coordinator — did not possess. He also would like someone with experience in building a program as Kansas skids toward its 10th consecutive losing season.

Long said he would not exclude high-level assistant coaches or NFL coaches from his search, but he did admit that they would not necessarily be his priority.

"These jobs are too big to learn on the job," Long said.

The ideal candidate, he continued, will also bring much-needed energy and recruiting chops to the job. The program has been so downtrodden for years that not even an upset win over TCU a couple weeks ago did anything to move the needle, while the challenges of recruiting to Kansas given its history of losing and the fact that there are few prospects in its own backyard are daunting.

As for a timeline, Long said he wants to have someone in place "sooner than later," and perhaps even before Beaty finishes out the season. The early signing date for recruits in December makes timing of the essence, and it's a big reason why Long decided to make the change this past weekend.

"There have been a number of candidates that have sought me out to know they were interested. Some of them I thought about before the announcement," Long said. "But there really isn't a front-runner. I want a leader of young men, someone with a history and track record of building a program, because we need that. But I hope our fanbase understands it's not a quick-fix thing. We have a lot of challenges."