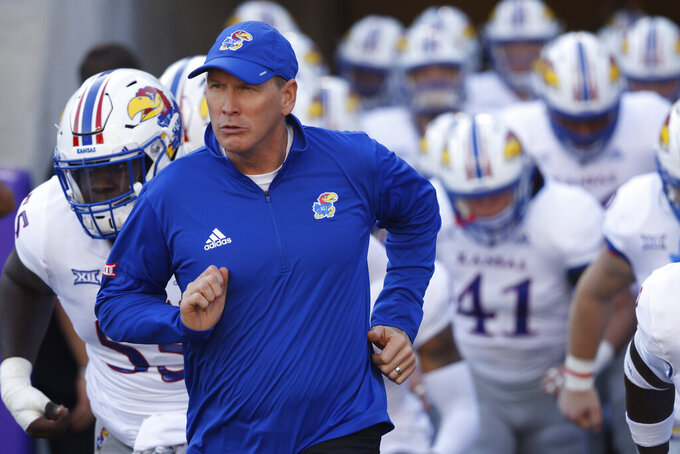 FILE - Kansas head coach Lance Leipold takes the field with his team before playing TCU in an NCAA college football game Saturday, Nov. 20, 2021, in Fort Worth, Texas. Kansas is set to kick off its season on Sept. 2, 2022, against Tennessee Tech. (AP Photo/Ron Jenkins, File)

LAWRENCE, Kan. (AP) — Kansas added an additional year to football coach Lance Leipold's contract Thursday that will keep him on the sideline through the 2027 season, a reward for a two-win first year that raised hopes for a long-awaited turnaround.

Leipold was hired last year, shortly after the Jayhawks parted with Les Miles following a winless season and amid sexual harassment allegations from his time at LSU. And despite never having an opportunity to put together a full recruiting class or working with his team in spring football, Leipold's progress was evident in a late-season upset of Texas.

“This is a statement about our exceptional confidence in Lance, his outstanding staff and the unlimited potential of Kansas football,” said Jayhawks athletic director Travis Goff, who was hired shortly before he chose Leipold as his coach.

“When you consider he and his staff did not arrive until May (2021), and therefore did not have a chance to coach our guys until August last year, the 2021 season could be considered ‘Year 0,’" Goff explained. “Given the progress that’s been made both on and off the field in such short order, I could not feel more strongly about the trajectory of this program.”

Leipold was a popular pick among Kansas fans because of his Midwest pedigree, small-town roots and ability to build a program. He won six Division III national championships in eight seasons at Wisconsin-Whitewater, then proved he could win at the Division I level when he spent three years rebuilding Buffalo, followed by three straight bowl games.

Along with upsetting the Longhorns last season, the Jayhawks put a scare into Oklahoma and lost one-possession games to TCU and West Virginia — further evidence that the culture Leipold was trying to build had taken root.

Earlier this week, Leipold showed his affinity for the Jayhawks by announcing an endowment fund established along with his wife to provide financial support for an on-field graduate assistant for the football program.

“It shows, I think, our commitment and our appreciation,” Leipold said. “We're going to need a lot from everybody and you have to do it yourself sometimes. We've tried to do certain things at each stop because we think it's important. The timing of the year, that didn't play a part in our thought process at all. We're just happy we could do it.”