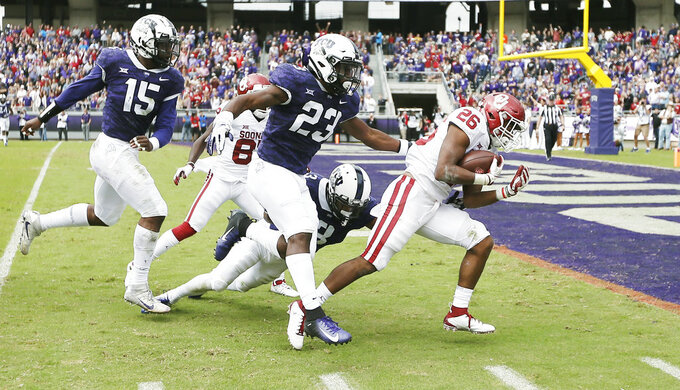 NORMAN, Okla. (AP) — Like clockwork, Oklahoma has developed yet another star freshman running back.

Kennedy Brooks is the latest off the assembly line. He ran for 168 yards and a touchdown during Saturday's 52-27 win at TCU , the most yards rushing for an Oklahoma freshman since Samaje Perine set the FBS record against Kansas in 2014.

"I think it's more so about an opportunity," Murray said. "This team knows what he's capable of. He's being doing it since high school. It's exciting to see him go out and do what he did this weekend."

The redshirt freshman likely will carry more of the load heading into No. 8 Oklahoma's home game against Kansas State on Saturday.

Running backs coach Jay Boulware has seen this before from his freshmen. Perine burst onto the scene and put together one of the best seasons in Oklahoma history in 2014. He left after his junior year as the school's all-time rushing leader. Joe Mixon was a freshman the next season, and he posted 1,109 yards and 11 touchdowns from scrimmage. He set the school record for single-season all-purpose yards the next year.

Rodney Anderson might have been the next one up in 2016, but he was injured during preseason camp. Last season, Trey Sermon was a starter for the first half of the season and thrived in a role as a closer. Though Anderson took over as the lead back the second half of last season, Sermon finished with 744 yards rushing and five touchdowns and added 139 yards and two touchdowns receiving.

Anderson got off to a strong start this season, but he suffered a season-ending knee injury in the second game against UCLA, opening the door for others to get more work. Brooks ran for 107 yards and two touchdowns against Baylor, then ran for 34 yards on three carries against Texas before his breakout game against TCU.

"Jay Boulware's done a good job of taking those young guys, molding them early," Oklahoma coach Lincoln Riley said. "We've worked hard to, even if one guy's getting the lion's share of the reps game-wise, at some point, we've worked hard behind the scenes knowing to play championship level ball, to play consistent as we want to throughout the season, it's going to take more than one or two running backs. And it always has."

Brooks isn't a battering ram like Perine and Sermon or a speedster like Mixon. Riley said Brooks "looks like he's out running in the park with his labrador." Murray called Brooks' running style "nonchalant."

The players and coaches said Brooks has mastered the mental game at the college level much the way he did in his prep days at Mansfield (Texas) High School.

"He was ultra-productive and the tape was really good," Riley said of Brooks in his high school days. "He wasn't just built unbelievably. He didn't have 4.3 speed. You didn't see him just violently running over people. He was in the right place at the right time almost every single time. He's been like that here as a runner. There's an effortless quality to him. He has just great feel."