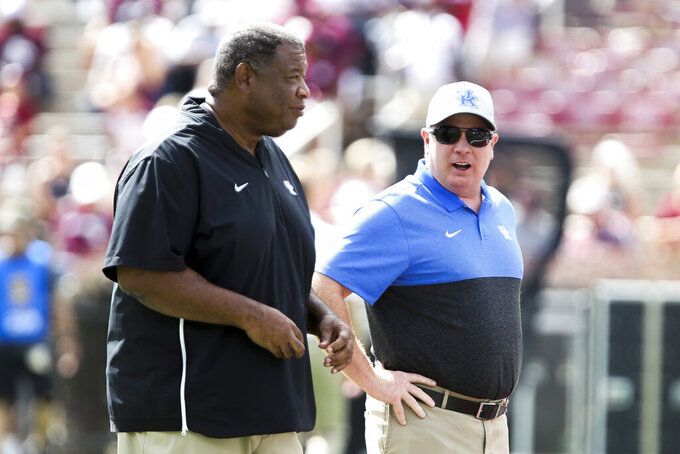 COLUMBIA, S.C. (AP) — When Kentucky faces South Carolina on Saturday night, the winner will let out a sigh of relief and the loser will be in all-out free fall.

Welcome to what could be aptly dubbed the Panic Bowl.

The Wildcats (2-2, 0-2 Southeastern Conference) and the Gamecocks (1-3, 0-2) are each looking to end two-game losing streaks and finally break into the win column in conference play. A loss would also set already nervous fans bases a-Twitter with questions and calls about what's gone wrong in what looked like promising seasons.

Kentucky, which expected to build on a 10-3 season last fall, has dropped a tight game against Florida before getting handled on the road at Mississippi State.

Wildcats coach Mark Stoops has heard the critics and believes his team can quiet the noise as the season continues.

"People like to panic," Stoops said. "We don't necessarily panic in our building. We like to get back to work and get better."

South Carolina also is at a pivotal point in its season. Following Kentucky is an open week, seven more days for outsiders to snipe and pick away at a so-far underachieving program this season.

The Gamecocks blew a 11-point second-half lead to lose to North Carolina in the opener and, after an anticipated blowout, 47-23, loss to Alabama, were ineffective most of the way in an ugly, 34-14 loss at Missouri.

They've lost five straight to Kentucky and No. 6 would leave South Carolina off to its worst start since the 1999 team went 0-11 in Lou Holtz's first season.

"We have pressure every single week," South Carolina coach Will Muschamp said. "Every single week, there's a lot of pressure, and you know what? There's more pressure internally than there is externally, I can assure you of that."

Kentucky has a young team that's still adjusting to not having last year's leaders and playmakers, SEC defensive player of the year linebacker Josh Allen and tailback Benny Snell Jr., who was second in SEC rushing with 1,449 yards. Stoops said he talked to his players at halftime trailing 21-3.

The Wildcats played better the final two quarters, but that was too late, Stoops said.

"It wasn't good enough. It wasn't up to our standards and expectations," he said. "We have got to go back and try to get them fixed."

Some other things to watch when Kentucky faces South Carolina:

The Wildcats have won five in a row over South Carolina. But before this most recent turn, the Gamecocks had won 13 of 14 in a run from 2000 through 2013.

Both Kentucky's Sawyer Smith and South Carolina's Ryan Hilinski became starters due to season-ending injuries to quarterbacks who started the season. Smith is a junior transfer from Troy who took over for Terry Wilson, out for the year with a left patella tendon injury. Hilinski, a freshman who enrolled in January, was put in following Jake Bentley's left foot fracture in South Carolina's opener.

South Carolina lost starting safety Jamyest Williams to the NCAA transfer portal this week, the junior deciding to end his season, redshirt and prepare for two more years elsewhere. Williams said on social media he gave the program all he had. Muschamp wished him well moving forward.

Kentucky receiver Lynn Bowden Jr. became the first Wildcat with six or more receptions in the first four games of a season since James Whalen in 1999. Bowden is only the second Kentucky player in history with 125 yards receiving in two road games, joining Larry Seiple who played at Kentucky from 1964-66 before winning a pair of Super Bowl titles with the Miami Dolphins.