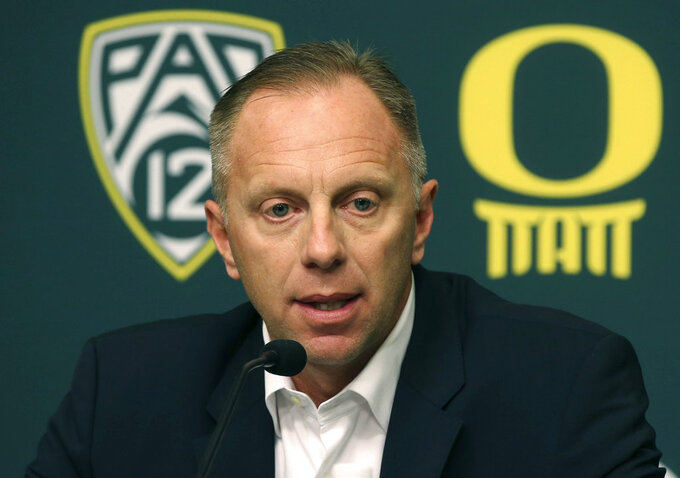 FILE - In this Nov. 29, 2016, file photo, Oregon athletic director Rob Mullens talks to the media in Eugene, Ore., after the firing NCAA college football head coach Mark Helfrich. There are a lot of new voices taking part in the College Football Playoffs selection process. Nearly half of the 13 committee members are serving for the first time. There are six new members taking part in the process to determine the first ranking for this season. It is the biggest turnover since the original group in 2013. The first 2018 ranking comes out Tuesday night, Oct. 30, 2018. “Every committee, every group, and every year in unique too, so even if you have the same members, it would be unique because it’s a different data set and a different year,” said Mullens, the fourth-year committee member and new chairman. (Chris Pietsch /The Register-Guard via AP, File)

GRAPEVINE, Texas (AP) — The Latest on the first College Football Playoff rankings of the season (all times local):

Alabama, Clemson, LSU and Notre Dame are the top four teams in the first College Football Playoff rankings of the season.

The 13-member selection committee released the first of its five weekly top 25s before the four-team field is set for the College Football Playoff semifinals on Dec. 2.

Michigan is fifth, followed by Georgia and Oklahoma.

The top four teams were no surprise. The same four teams are Nos. 1-4 in the latest Associated Press college football poll, just with Notre Dame third and LSU fourth.

Next week's rankings figure to look a lot different. Four games matching top-20 teams will be played Saturday, including Alabama at LSU.

UCF was the highest ranked team from outside the Power Five conferences at 12th.

If form holds, two of the top four teams in the first College Football Playoff ranking of the season will go on to play in the national semifinals.

After meeting for a day and a half at a hotel outside Dallas, the CFP selection committee will unveil its initial top 25 Tuesday night, the first of the nationally televised weekly revelations until the one that really counts on Dec. 2.