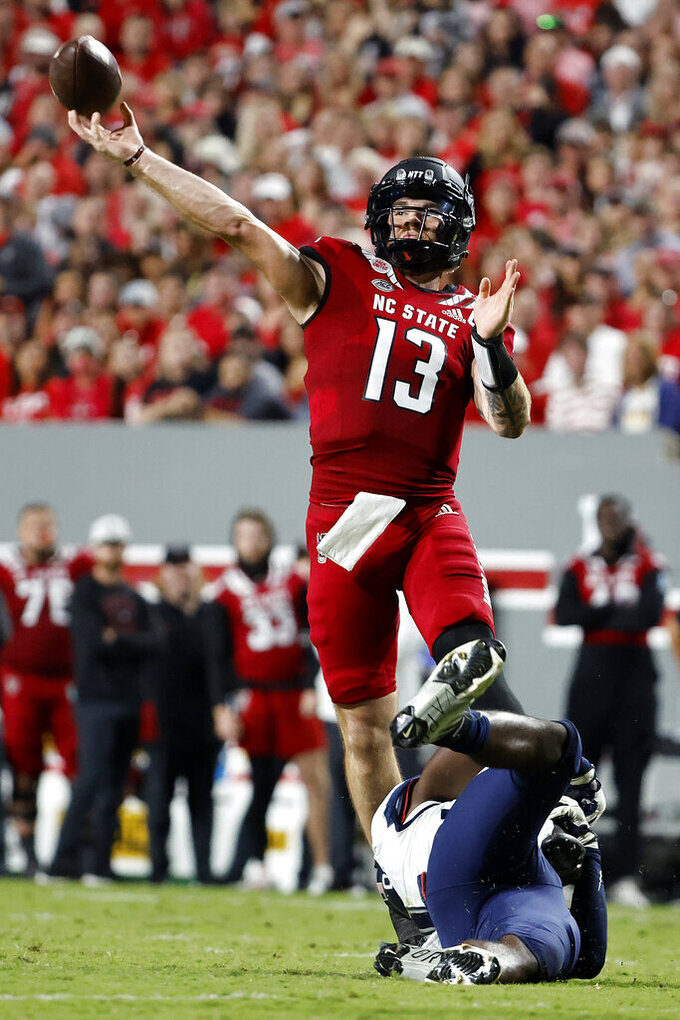 North Carolina State's Devin Leary (13) avoids a Connecticut defender to pass the ball during the first half of an NCAA college football game in Raleigh, N.C., Saturday, Sept. 24, 2022. (AP Photo/Karl B DeBlaker)

RALEIGH, N.C. (AP) — Devin Leary threw for 320 yards and four touchdowns — including a 75-yarder on the first play from scrimmage — and No. 12 North Carolina State routed UConn 41-10 on Saturday night.

Leary completed 32 of 44 passes for the Wolfpack (4-0) while throwing touchdowns to four different receivers, including one to sophomore Porter Rooks for the first score of his career.

Victor Rosa scored the lone touchdown for UConn (1-4) on an 11-yard run late in the fourth quarter.

The Wolfpack, tuning up for a showdown with No. 5 Clemson next week, wasted no time in putting points on the board as Leary connected with Thayer Thomas on the very first play from scrimmage. It was the longest play from scrimmage of the season for N.C. State, and it was also the first time the team has scored on its first offensive play of a game since 1991.

“They came out excited to play and with a great start. It’s good to see Devin get in a rhythm,” Wolfpack coach Dave Doeren said. “Almost everything we talked about during the week, we got to see.”

N.C. State scored on its first five possessions and led 31-0 before UConn got on the board. After Camryn Edwards intercepted Leary, Noe Ruelas kicked a 28-yard field goal for the Huskies as time expired in the second quarter.

UConn had just 160 yards of total offense and converted only 2-of-12 third downs.

“You don’t ever feel good after a loss. You just don’t. Nobody feels good, but they don’t feel discouraged, either,” UConn coach Jim Mora said. “There’s progress being made here.”

N.C. State: The Wolfpack didn’t overlook their opponent and played sharp football. N.C. State had 29 first downs and never punted on its way to racking up 481 yards of total offense, averaging 6.3 yards per play.

UConn: After losing 59-0 at Michigan last week, the Huskies played a second straight road game against a team that was simply out of their league. Until its final possession of the game, the Huskies didn’t have a drive that lasted for more than seven plays. UConn’s schedule gets a bit more manageable from here, as it plays just one more Power 5 opponent this season.

The Wolfpack now have a 13-game home winning streak at Carter-Finley Stadium, a stretch that dates to November 2020. N.C. State has outscored opponents by an average margin of 19.9 points at home during this stretch.

It’s currently the fifth-longest home winning streak in FBS. The longest belongs to Clemson at 36 games — a mark the Wolfpack will try to break next week.

“It always feels good to play in the Carter,” Wolfpack wide receiver Devin Carter said. “We know (Clemson) is an away game, so we know it’s going to be a hostile environment, but we’re ready.”

Doeren would like to see ESPN’s College Gameday show go to Clemson next week.

Midway through the third quarter, N.C. State ran a designed fake field goal play from the UConn 11-yard line. It was unsuccessful, as kicker Chris Dunn gained just one yard on a scamper.

Dunn, N.C. State’s career scoring leader, did not return to the game after being tackled, leaving redshirt sophomore Collin Smith to take over kicking duties. Smith connected on a 40-yarder and a PAT, but missed a 47-yard attempt.

“(Dunn) is good,” Doeren said of his starting kicker’s status. “I don’t think he’s been tackled in a long time. It was good to get Collin Smith in there and get him an opportunity.”

While thrashing a team like UConn won’t vault N.C. State up the polls, it certainly doesn’t hurt the Wolfpack either. N.C. State could move up after No. 10 Arkansas lost.

N.C. State: In their ACC opener, the Wolfpack visit No. 5 Clemson.

UConn: Still searching for the first win against an FBS opponent, the Huskies host Fresno State.