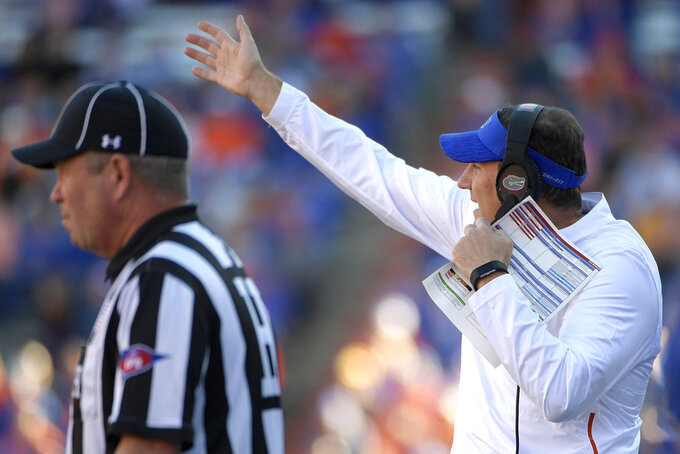 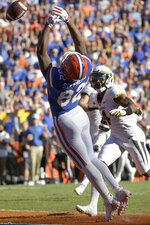 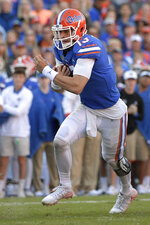 Lock picked apart Florida's defense for the second straight year, throwing three touchdown passes to lead the Tigers to a 38-17 victory against the 13th-ranked Gators on Saturday

Lock completed 24 of 32 passes for 250 yards, with scoring throws to Albert Okwuegbunam, Kam Scott and Emanuel Hall that stunned the Swamp. His best performance in league play this season came a week after a heartbreaking loss on the final play against Kentucky.

Lock, a senior and projected first-round draft pick, was equally effective against Florida in a 45-16 victory last year. He will head to the NFL with six touchdowns passes and an interception in his final two games against the Gators.

"This feels really good," Lock said. "It's hard to put into words. It was a different week for us. You kind of had that feeling there's no way you lose that football game (to Kentucky). I think after a loss like that, there's no way you can go in and lose a game.

Florida also was hoping to rebound after a 36-17 loss to Georgia eliminated it from contention in the SEC East. But the Gators came out flat and didn't find a spark until it was too late.

Coach Dan Mullen benched starting quarterback Feleipe Franks late in the third quarter — the home crowd cheered wildly — and backup Kyle Trask promptly directed a 75-yard touchdown drive in which he converted two fourth downs. Trask found Josh Hammond in the end zone on the second one for a 7-yard score that made it 35-17.

After the game, Mullen sounded like he would stick with Franks moving forward.

"Everybody's going to have some good days and bad days," Mullen said. "I'm certainly not here pointing the finger that he was terrible. And we didn't pull him because he was terrible. We pulled him 'cause the offense wasn't moving and we wanted to see if somebody else could get it done and put Kyle put in, not because of his individual, personal performance."

Mullen called the back-to-back losses by a combined 40 points a "reality check."

"It's a little bit of a reality check of where we are with the guys," Mullen said, pointing to consecutive wins against Mississippi State and LSU. "If we come out and play really well as a team in all three phases, we're good enough to play with anybody out there. If we don't, we're not."

Missouri: The Tigers beat Florida for the fourth time in the last six meetings, including twice on homecoming. All six have been blowouts, with Florida's 21-3 victory in 2015 being the closest contest.

Florida: The Gators opened a three-game homestand with a dud and looked lost on both sides of the ball, ending with the worst loss in Mullen's first year.

Lock showed why he's considered a top NFL talent. His 41-yard throw to Hall down the sideline was perfect, setting up a touchdown run in which Lock held the defensive end before pitching the ball. And his TD throw to Okwuegbunam came after a pre-snap read and adjustment.

He's been at his best against Florida. He completed 15 of 20 passes for 228 yards and three TDs in last year's rout.

He hadn't been nearly as sharp against the SEC this season, completing 50 percent of his passes for 732 yards, with one touchdown and five interceptions against Georgia, South Carolina, Alabama and Kentucky. Getting Hall back was a big boost. He missed the last four games with hip and groin injuries.

Florida could drop out of the Top 25 poll after back-to-back lopsided losses to Georgia and Missouri.

Missouri: Hosts Vanderbilt with a chance to become bowl eligible.