Lock's Heisman campaign to begin in earnest in Mizzou opener 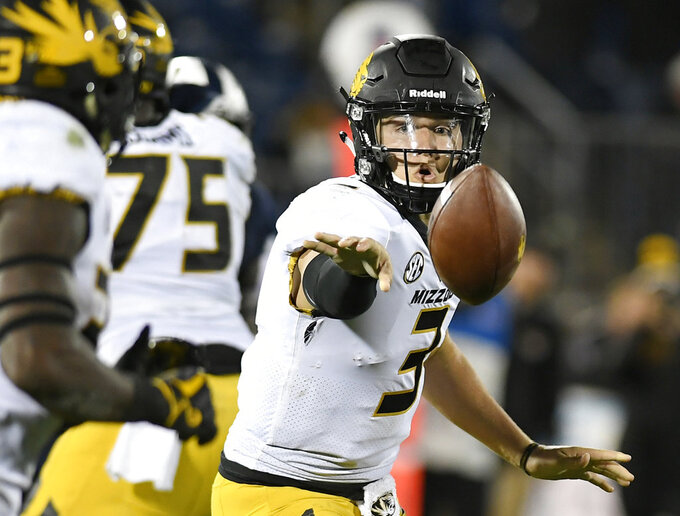 FILE - In this Oct. 28, 2017, file photo, Missouri quarterback Drew Lock (3) passes to Missouri running back Larry Rountree III (33), during the second half of an NCAA college football game, in East Hartford, Conn. The Tigers ranked eighth nationally in total offense last year. And with 10 starters on offense returning _ including its entire starting offensive line _ Missouri is in good shape to replicate its elite offense from last season.(AP Photo/Jessica Hill, File)

COLUMBIA, Mo. (AP) — Missouri quarterback Drew Lock was asked this week about his accomplishments, expectations — and his new, limited-edition bobblehead.
The toy figure shows Lock cocking his arm back with a football while showcasing a pristine smile.
"I thought they did a good job," the senior quarterback said.
But it wasn't perfect.
"The eyes are brown, I have really blue eyes," Lock said. "Shows a little forehead, that's a different look for me, I'm not a huge forehead shower."
Toys, award watch lists and NFL draft projections. The 2018 Heisman Trophy campaign is certainly under way for Lock, and his first performance comes Saturday at home against FCS opponent Tennessee-Martin in the season opener
Lock and the Tigers have averaged 73 points in their previous three games against FCS opponents. Critics early in his career argued that Lock only performed well against weaker opponents, but after breaking the Southeastern Conference single-season record with 44 touchdown passes in 2017, Lock has turned the criticism into praise and preseason accolades.
"I think you look back two years and maybe even last year, I probably wasn't going to get those (accolades)," Lock said. "So to change people's minds, to get on the radar nationally is a big deal."
The Tigers ranked eighth nationally in total offense last year. And with 10 starters on offense returning — including the entire starting offensive line — Missouri is in good shape to replicate its elite offense from last season.
Former Tennessee coach and Dallas Cowboys wide receivers coach Derek Dooley will take over as offensive coordinator, replacing Josh Heupel, who took the head job at Central Florida in December.
NEW FACES
By the end of the 2017 regular season, Missouri coach Barry Odom was left without offensive and defensive coordinators. Defensive coordinator DeMontie Cross was fired after two games a year ago. In December, Odom decided to stay in house and hired former safeties and secondary coach Ryan Walters to replace Cross. Walters enters his fourth year at Missouri.
MEMPHIS MEMORIES
Walters was on Odom's staff when the current Missouri head coach led Memphis' defense from 2012-14. In Odom's first season in Memphis, Tennessee-Martin upset the Tigers 20-17, a game Odom would rather forget.
"I know. I was there," Odom said. "There was a rain delay, lightning delay, we were off the field for a long time. Yep, I remember it very well."
ROMOCALL
Lock said he sometimes has trouble preparing for night games and the nuances they bring, like resting at the hotel versus watching film all day. So what did he do? Thanks to Dooley, he was able to call former Cowboys quarterback Tony Romo for help.
"Talked to him a bit about what he did in night games," Lock said. "A couple of good pointers that I'm going to use this year, so I think just learning to adapt."
The game on Saturday is a 3 p.m. Central start, so Lock needn't worry too much this time.
DIFFERENT DUO
In 2017, running backs Ish Witter and Larry Rountree III led the charge in the backfield during Missouri's six-game winning streak at the end of the season. Rountree jumped into the mix after running back Damarea Crockett missed the final seven games of Missouri's season with a shoulder injury. Witter graduated in May, so Rountree and Crockett will lead the backfield.
FRESH START
Missouri gave up 43 points in last season's opener against Missouri State. Despite winning the contest, members of the defense were upset with their performance in that game.
"And if some guys use that as motivation for why we need to play better in Game 1, then I'm all for it," Odom said.
___
More AP college football: https://apnews.com/tag/Collegefootball and https://twitter.com/AP_Top25