Louisville, Georgia Tech looking to cut down on turnovers 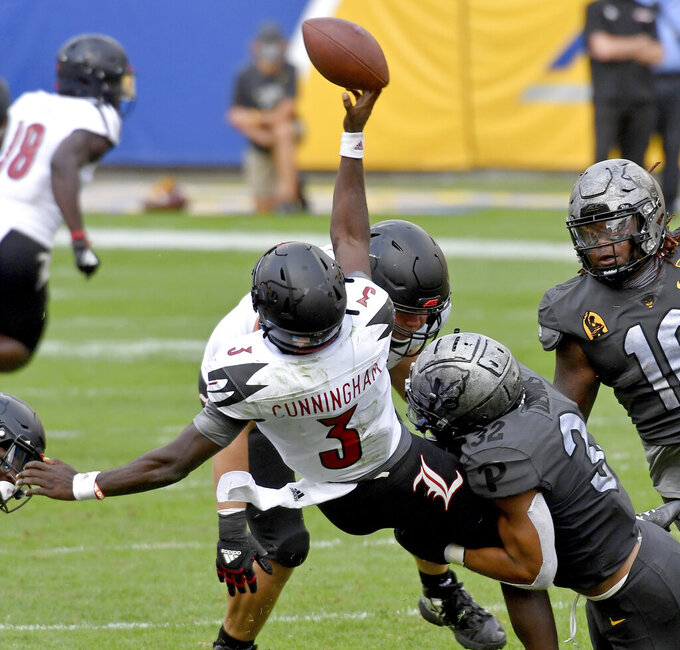 FILE - In this Saturday, Sept. 26, 2020, file photo, Pittsburgh linebacker SirVocea Dennis takes down Louisville quarterback Malik Cunningham as he gets a pass off in the fourth quarter during an NCAA college football game at Heinz Field, in Pittsburgh. Louisville quarterback Malik Cunningham and Georgia Tech’s Jeff Sims will be looking to cut down on interceptions and other problems that have left each team with two straight losses entering Friday night's, Oct. 9 game in Atlanta.(Matt Freed/Pittsburgh Post-Gazette via AP, File)

ATLANTA (AP) — Geoff Collins believes Georgia Tech is on a path to the top of the Atlantic Coast Conference.

Early in Collins' second season as coach, the Yellow Jackets are still learning painful lessons about turnovers and other mistakes. A similarly frustrating trend also has Louisville below .500 as the Cardinals prepare for their first visit to Georgia Tech on Friday night.

Louisville (1-2, 0-2 ACC) and Georgia Tech (1-2, 1-1) will be looking to clean up mistakes, including interceptions, that have left each team with two straight losses.

“This is going to be one of the elite programs in college football sooner than later,” Collins said. “The guys understand that. The guys are working toward that every single day. We’ve just got to learn to not hurt ourselves."

Jeff Sims has thrown two or more interceptions in each of his first three starts for Georgia Tech, including four in a 37-20 loss at Syracuse on Sept. 26.

Sims, a freshman, has eight interceptions with three touchdown passes.

“Jeff knows he’s got to protect the ball better,” Pattenaude said. “He can’t be cavalier with the ball. He’s a great athlete. So I said ‘Listen man, if the guy is covered, don’t jam it in there, just take off and run. You’ve been making a ton of plays just being an athlete and taking off and running.’"

Louisville junior Malik Cunningham was sacked seven times and threw three interceptions in a 23-20 loss to Pittsburgh on Sept. 26.

“Offensively, we know last game was a very poor outing by us, to say the least,” said Louisville coach Scott Satterfield. “We got whipped up front, we did not make plays in the passing game. We were not in sync at all offensively, and when that happens against a really good defense you are going to look really bad. That is what happened to us.”

Louisville's Javian Hawkins ranks second in the ACC with 104.3 yards rushing per game. He has 313 yards and three touchdowns. He has five straight games with a rushing touchdown, including a 75-yard score against Pitt.

Led by the two freshmen, Sims and Gibbs, Georgia Tech has moved up the ACC total offense rankings. The Yellow Jackets ranked last in the league, and 127th in the nation, with 286.3 yards per game in 2019. They are fourth in the ACC and 22nd in the nation with their average of 454 yards this season.

Cunningham is healthy and expected to start after being carted off the field in Pittsburgh following a tackle as he threw his third interception. He has been sacked 11 times this season. “It’s something that’s very fixable,” Satterfield said. “We had a really good week working on all those things and those blocks.”

VOLUME UP, PENALTIES DOWN?

Collins has turned up the volume on speakers in practice to help his players adjust to crowd noise being pumped into games during the coronavirus pandemic. Georgia Tech already has been called for 32 penalties, including many Collins believes is the result of poor communication due to the noise.

So it was time to turn up the speakers on the practice fields.

“I think the highest that volume goes up to is 10," Collins said. "We’ve been cranking that thing up to 11."

AP Sports Writer Gary B. Graves in Louisville, Kentucky contributed to this report.