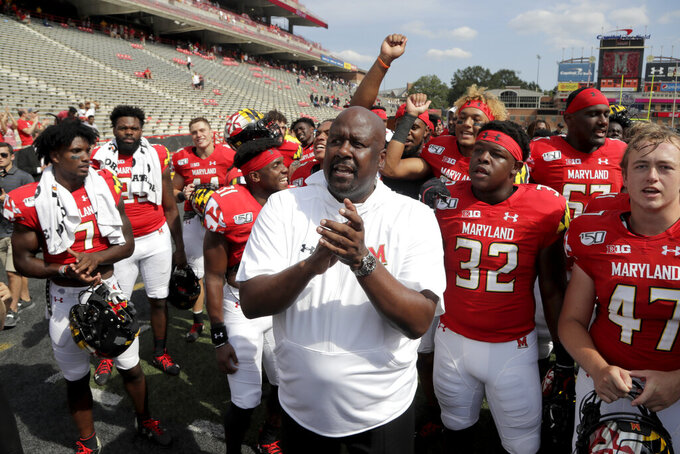 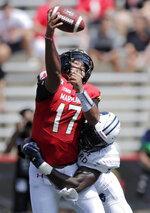 COLLEGE PARK, Md. (AP) — The game started with coach Michael Locksley and quarterback Josh Jackson unsure what to expect in their Maryland debut.

By halftime, Jackson was done for the day and Locksley' biggest concern was trying to keep from running up the score on defenseless Howard.

Jackson threw four touchdown passes and the Terrapins rolled to a 79-0 victory Saturday in a record-breaking performance.

With Jackson leading the way, Maryland scored 28 points in both the first and second quarters to shatter the school mark for most points scored in one half. The assault continued in the second half, with the only suspense being if the Terrapins would break the school record for points in game — 80 against Washington College in 1927.

Maryland's third-stringers had a first and goal at the 4 in the closing minutes but couldn't push the ball in.

Locksley didn't care. After taking advantage of Howard's porous pass defense in the first half, he had his two backup quarterbacks throw only three passes over the final 30 minutes.

"We made a decision at halftime that we were going to run the ball, even though they outnumbered us," said Locksley, who took over at Maryland after serving as Alabama offensive coordinator.

If there was any question about piling it on, Howard first-year coach Ron Prince exonerated Locksley during their brief postgame chat.

"He understood that we weren't trying to run the score up. We have respect for how the game should be played," Locksley said.

On this day, the Terrapins played it extremely well. They finished with a 623-68 advantage in total yardage, limiting Howard to 1 yard on the ground and four first downs.

Most of the highlights on offense were provided by Jackson, who came to Maryland after an injury-shortened sophomore season at Virginia Tech. He was uncertain how the layoff would affect him, although he needn't have worried — Jackson went 15 for 24 for 245 yards with TD throws of 26, 4, 6 and 24 yards.

The last Maryland quarterback to throw four touchdown passes in his first start was Mark Manges, against Villanova in 1975.

"It was nice. I kind of just got right back into the groove of things," Jackson said. "The touchdowns are cool and everything, but I was just glad we could go out and get a victory in the first game and now we did it. Seventy-nine points is pretty awesome for coach Locks and our team."

Backup Tyrrell Pigrome threw a 62-yard touchdown pass in the second quarter and ran for a 22-yard score to make it 63-0.

Maryland kept on coming with its backups, but Prince understood.

"First of all, it's my job to stop Maryland. Not Maryland's job," Prince said. "I thought coach Locksley was very sporting about the entire thing."

The Terrapins' defense also shined, limiting Howard to one first down before halftime while bottling up quarterback Caylin Newton, little brother of NFL star Cam Newton.

Newton went 3 for 11 for 23 yards, was sacked five times and did not play in the second half.

Punting was also a problem. Isaiah Moore had kicks of 14 and 3 yards, dropped the snap once and had a kick blocked for a safety.

This certainly wasn't what Prince was looking for in his first game as Howard's coach. He can console himself in knowing that competing against teams in the Mid-Eastern Athletic Conference can't possibly be as difficult as taking on a Big Ten school on its home turf.

"We knew Maryland was going to be a challenge. They have a fantastic roster," Prince said. "They're a big, strong team and they're going to be better."

Howard: It's not a stretch to say Prince has a heck of a lot of work to do if Howard is to be competitive in the MEAC. Offense, defense and special teams were all sub-par. At least the Bison will take away a nice check for driving down the road to play against a neighboring giant.

Maryland: Well, it's tough to top this performance in terms of getting off to a strong start under a new coach, though it would be foolish to measure Maryland's strength or improvement based on this awful mismatch.

Maryland has won 10 consecutive season openers, averaging 36.1 points per game during a streak that includes a pair of upset wins over Texas.

Howard: The Bison face Youngstown State next Saturday, the second of four straight road games at the outset of the season.

Maryland: A true test for the Terrapins looms next Saturday when No. 22 Syracuse arrives in College Park.