Maryland's Najarian back after offseason surgery 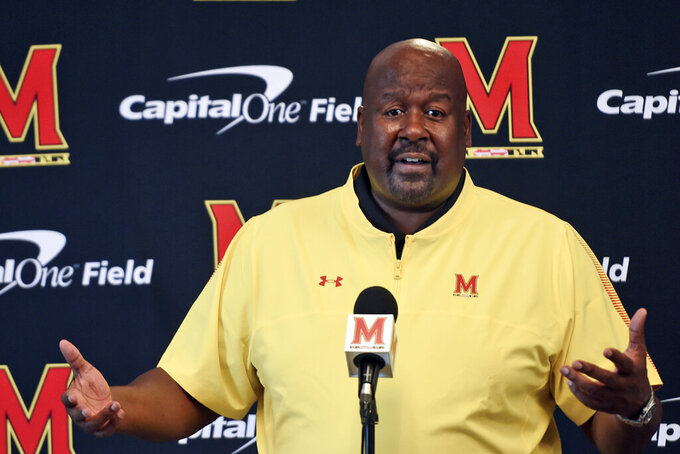 COLLEGE PARK, Md. (AP) — Maryland backup quarterback Eric Najarian is back throwing after offseason shoulder surgery, although the Terrapins are planning to be careful with him during fall camp.

“We’ll have him kind of on a pitch count," coach Michael Locksley said. “We’ll kind of monitor how many reps he takes throwing the football.”

Locksley spoke for about 30 minutes at media day Friday, and he talked a bit about the team's depth at quarterback. Taulia Tagovailoa started four of the five games Maryland played during the abbreviated 2020 season, and Najarian played a bit as well.

“I know we made it a priority to try to build the depth in that room, while also trying to bring in guys that will give us an opportunity to create competition for the position,” Locksley said.

“Here's a guy that had an NFL grade on him. I think he was a fifth-through-seventh round grade," Locksley said.

The Maryland quarterbacks will be working with a new offensive coordinator after the arrival of former Central Michigan coach Dan Enos. Enos has also been an assistant at Alabama, Arkansas and Michigan State, among other places.

Enos said there is mental, physical and emotional development that occurs with quarterbacks.

“It's year-round. We do things, within the rules that we can, year-round to try to develop these guys in those three areas,” Enos said. “During this summer, we challenged them. We gave them work to do. I met with each one of them individually after spring, and we do a throwing and drop mechanics analysis of them.”

After a season at Alabama, Tagovailoa came to Maryland, although his first season with the Terrapins was shortened because of the coronavirus pandemic. If this year is a bit more normal, he could have more chance to become the type of leader that a starting quarterback is expected to be.

“Coach challenged us this offseason to kind of bond together," Tagovailoa said. "We try to be a player-driven team.”