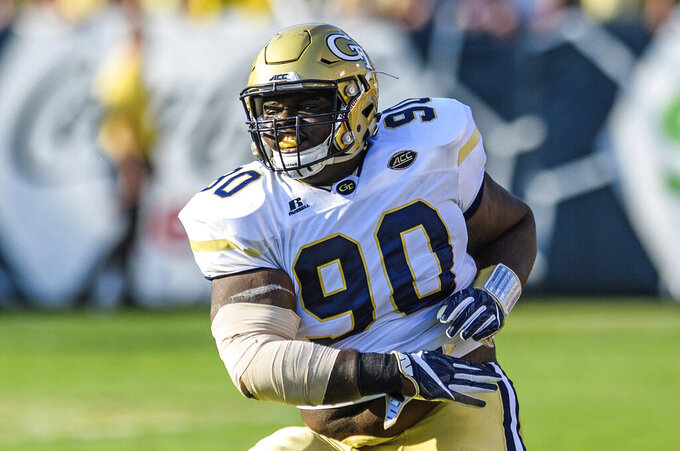 In this Saturday, Sep. 10, 2016, photo, Georgia Tech defensive lineman Brandon Adams reacts during the second half of an NCAA football game against Mercer, in Atlanta. Adams, a rising senior who was expected to be a key member of Georgia Tech's defensive line under new coach Geoff Collins, died at the age of 21, the school announced Sunday, March 24, 2019. Adams had been going through offseason workouts and was preparing for the start of spring practice when he died on campus Saturday. No cause was given. (AP Photo/Danny Karnik)

The 21-year-old Adams died Saturday . An autopsy was performed Monday.

Officer Stephanie Brown, an Atlanta Police spokeswoman, says the GBI's medical examiner's office needs more lab tests, including toxicology results, to determine the "cause and manner" of Adams' death. Brown says in a statement to The Associated Press that police investigators are working with the GBI.

Georgia Tech says its seniors and team captains have decided to start spring practice as scheduled on Tuesday. The practice will be closed to media.

Brown was a rising senior who was expected to be a key member of the Yellow Jackets' defensive line under new coach Geoff Collins.