Miami announces that WR Jeff Thomas is off its football team 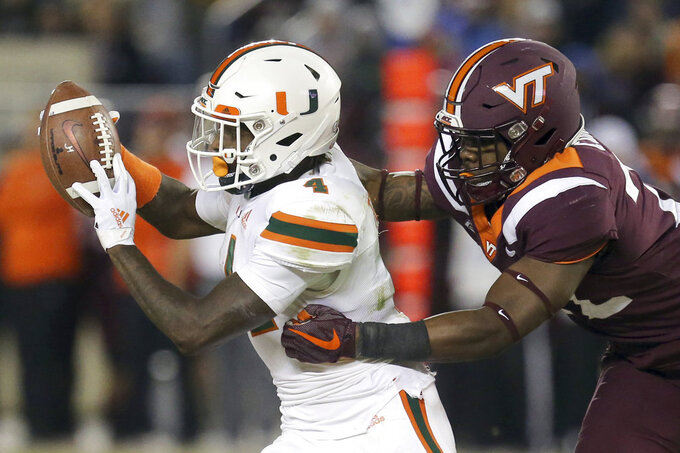 Thomas led Miami with 35 catches and 563 receiving yards this season. He was also a standout kickoff and punt returner for the Hurricanes, and became the first Miami player in more than two years to run back a punt for a touchdown when he took one in from 51 yards during last week's win at Virginia Tech.

A few days removed from that, he was gone. Thomas was not happy about not starting the Virginia Tech game at receiver, missed some practice time this week and coach Mark Richt ultimately made the call to end his tenure at Miami.

The specifics about what went wrong were not released Wednesday. In fact, the school and Thomas couldn't even agree on what really happened — Miami's release said he was dismissed, and the receiver put out a statement saying he and Richt simply agreed that he needed to leave.

"We have high standards for excellence, for conduct and for the commitment to team for all of the young men who wear our uniform, and we will not waver from those standards," Richt said in a statement sent out after practice. "We wish Jeff the very best as he moves forward in his journey."

Thomas insisted that he "did not get kicked off the team."

"I couldn't thank this program (for) how much they've done for me, and the things I've done on the field is my way of respect for the program," Thomas tweeted. He ended his post with "BeatPitt."

Miami (6-5, 3-4 Atlantic Coast Conference) plays host to No. 24 Pittsburgh (7-4, 6-1, No. 24 College Football Playoff) on Saturday. The Panthers have already clinched the Coastal Division title, a crown that Miami won last year and was the overwhelming pick to wear again this season.

But it has been a troubling year for Miami, which started out ranked No. 8 nationally and still isn't even assured of having a winning season. The Hurricanes lost four straight games from Oct. 13 through Nov. 10, have had three quarterbacks — current starter N'Kosi Perry, plus backups Cade Weldon and Jarren Williams — suspended at times, and had a starting linebacker suspended last week for taking an unauthorized painkiller.

There was also the midseason news that wide receiver Ahmmon Richards, who had a breakout freshman season in 2016 and struggled with injuries since, needed to retire from the sport because of a neck injury.

And now, the Hurricanes will be without perhaps their fastest player going forward.

Thomas, a sophomore from East St. Louis, Missouri, will have two years of eligibility remaining. He would very likely have to sit out the 2019 season if he transfers somewhere, though the NCAA could waive that if he presents some sort of case compelling enough for him to merit getting a hardship waiver.

It was a surprising fall from favor for Thomas. Miami's coaches choose captains on a weekly basis, and Thomas was a two-time selection there this season. His speed, smarts and route-running skills were something Richt had often raved about.

"I wish we had about three of him, to be honest with you," Richt said last month.

He doesn't have even one of him now.