Middle Tennessee breaks away from UConn in 2nd half, 44-13 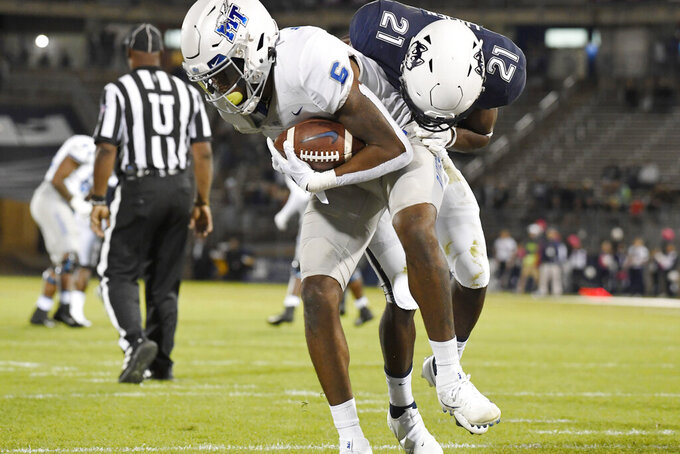 Cunningham had racked up 182 yards and three touchdowns in the first half — including scoring strikes of 25 and 18 yards to Izaiah Gathings and Jimmy Marshall, respectively, on Middle Tennessee's final two possessions before halftime to lead 24-13 at the break.

UConn (1-8) had scrapped into a 10-10 tie on a short pass from Steven Krajewski to tight end Brandon Niemenski and a career-long 47-yard field goal by freshman Joe McFadden on back-to-back possessions in the second quarter.

After Middle Tennessee (3-4) broke away with two unanswered touchdowns in less than three minutes, the lead was never threatened again. Cunningham threw completions to 10 receivers, Yusuf Ali led with five catches for 80 yards. Marshall had two TDs on four catches for 61 yards.

UConn scored its final points in the final seconds of the first half, settling for a 21-yard McFadden field goal as time ran out after two straight passes from the 4-yard line were broken up in the end zone by Middle Tennessee's Teldrick Ross.

Middle Tennessee came into Friday's game third nationally forcing 17 turnovers and had three takeaways against the Huskies, turning them into 12 points.

Krajewski completed 21 of 37 passes for 237 yards with a touchdown but was intercepted twice.