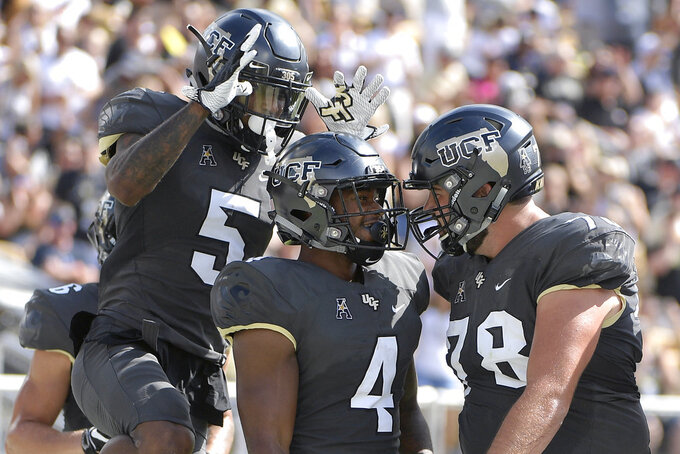 Central Florida running back Taj McGowan (4) is congratulated by wide receiver Dredrick Snelson (5) and offensive lineman Wyatt Miller (78) after rushing for a 2-yard touchdown during the first half of an NCAA college football game against Navy, Saturday, Nov. 10, 2018, in Orlando, Fla. (AP Photo/Phelan M. Ebenhack)

ORLANDO, Fla. (AP) — No. 11 UCF is becoming predictable as the Knights pursue another undefeated season.

The defending American Athletic Conference champions keep on winning while insisting they aren't listening to chatter about whether they will be deserving of a berth in the College Football Playoff if they remain unbeaten when the four-team field is picked in December.

Now, coach Josh Heupel and his players say they're turning their focus to No. 25 Cincinnati, which comes to Florida next week for a crucial AAC test.

A victory over the Bearcats will clinch a spot in the conference championship game.

"At the end of the day, if you're doing it right inside of your program, each game becomes bigger," Heupel said Saturday after McKenzie Milton threw for two touchdowns and ran for a third to key a 35-24 victory over Navy that extended the nation's longest winning streak to 22 games.

"That's what we want. That's the type of program we're trying to build," Heupel added. "I have great respect for Cincinnati. We're going to enjoy this one today and move on to Cincinnati tomorrow."

UCF (9-0, 6-0) finished as the only unbeaten team in the Football Bowl Subdivision a year ago, but was not included in the CFP. The Knights currently are one of four FBS teams that remain undefeated, along with the top three teams in the latest CFP rankings — Alabama, Clemson and Notre Dame.

Although Heupel reiterated the Knights are only concerned with trying to go "1-0 every week," the first-year coach said he's growing tired of playoff talk.

"No, we want to be in that conversation. We want to be in it every single year," Heupel said. "We're building this program to have sustained success."

Milton completed 17 of 21 passes for 200 yards without an interception for the Knights, who've scored at least 30 points in every game throughout its long winning streak.

Dredrick Snelson scored on receptions of 34 and 12 yards, Greg McCrae ran for 101 yards and one TD, and the Knights finished with 297 yards rushing to stay atop the AAC East Division standings

The Knights are 12th in the latest CFP rankings. Beating Navy (2-8, 1-5), which has lost seven straight games, won't exactly silence critics who feel the defending AAC champions are undeserving of a higher ranking because of the strength of their schedule.

"Obviously, it's (disappointing) to lose again," Navy coach Ken Niumatalolo said. "That's a really good team, though. They have won a ton of games. ... There's no consolation prizes for coming close, but I was proud of the way our guys fought."

A week after being limited to a season-low 124 yards rushing in a 42-0 road loss at Cincinnati, Navy got one of the nation's most productive running attacks back on track. The Midshipmen rolled up 374 yards total offense, all of its rushing.

Quarterback Zach Abey scored on runs of 5 and 8 yards, finishing with a team-best 85 yards rushing on 26 carries for Navy. He attempted two passes, both incompletions and was sacked once trying to throw.

Tre Walker ran for 82 yards on seven attempts, and Mike Martin ran for 51 and a fourth-quarter TD.

Navy: The Midshipmen finished a three-week stretch in which they lost to Notre Dame, Cincinnati and UCF, who were a combined 25-1 entering Saturday. Their chances of slowing UCF's potent offense hinged on getting its own running game going and dominating time of possession to keep Milton off the field.

UCF: Milton was sharp in his second game since sitting out a road win over East Carolina with an undisclosed injury. The junior from Kapolei, Hawaii, hit 10 of his first 11 passes for 106 yards, completing throws to seven different receivers. He has at least one TD pass in 22 consecutive games.

The Knights dropped two spots in the Top 25 after yielding 670 yards and 40 points in a 12-point home victory over heavy underdog Temple. They don't figure to earn any style points this week, either, after allowing the Midshipmen to hang around until the fourth quarter.