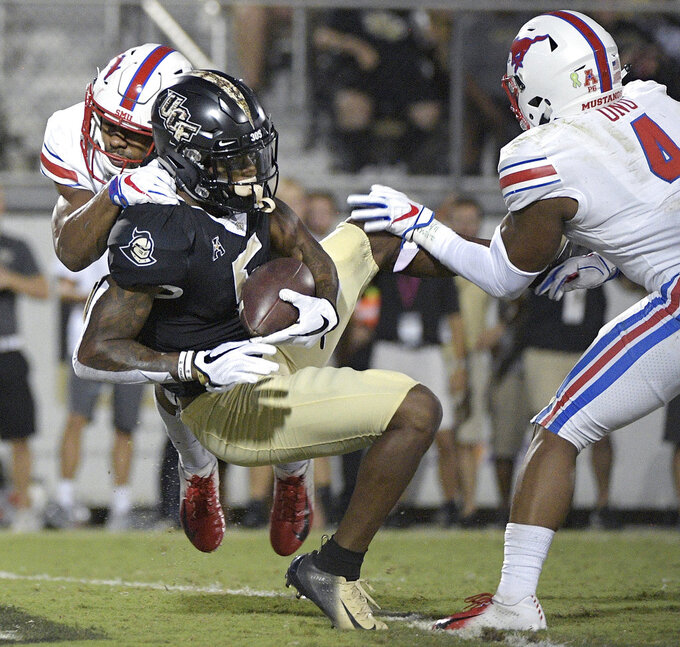 UCF wide receiver Dredrick Snelson (5) catches a pass in the end zone for a 14-yard touchdown between SMU defensive back Rodney Clemons, left, and safety Mikial Onu (4) during the first half of an NCAA college football game Saturday, Oct. 6, 2018, in Orlando, Fla. (AP Photo/Phelan M. Ebenhack) 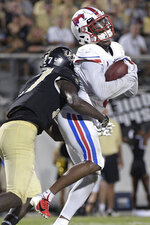 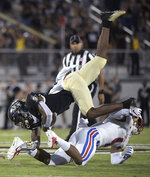 ORLANDO, Fla. (AP) — McKenzie Milton threw for 278 yards and two touchdowns to help No. 12 UCF extend the nation's longest winning streak to 18 games with a 48-20 victory over SMU on Saturday night.

Adrian Killins rushed for 113 yards and a TD for the Knights (5-0, 2-0), one of three unbeaten teams remaining in the American Athletic Conference, along with Cincinnati and South Florida.

Milton completed 18 of 34 passes with one interception after accounting for 12 touchdowns — seven passing and five rushing — in nonconference victories over Florida Atlantic and Pittsburgh the previous two weeks.

The junior from Kapolei, Hawaii, tossed TD passes of 14 yards to Dredrick Snelson in the first quarter and 30 yards to Tre Nixon on the first play of the fourth quarter.

The Knights also got two TD runs from Otis Anderson and one from Trysten Hill, a 315-pound defensive tackle who lined up as a fullback before plowing into the end zone on fourth-and-1 and drawing an unsportsmanlike conduct penalty for spiking the ball.

Ben Hicks came off the bench to replace freshman quarterback William Brown for SMU (2-4, 1-1). He threw a 5-yard TD pass to James Proche and finished 15 of 23 passing for 153 yards and zero interceptions. Proche had 12 receptions for 100 yards and two touchdowns.

SMU: The Mustangs lost for the first time with Brown as their starting quarterback. The freshman, who led them to victories over Navy and Houston Baptist in his first two starts, completed 4 of 6 passes for 44 yards on the opening drive, setting up a 31-yard field goal. He attempted three more passes, all incompletions, before being replaced by Hicks in the second quarter with UCF leading 21-3. Brown returned in the fourth quarter and tossed a 19-yard TD pass to Proche with 36 seconds left to wind up 9 of 19 for 84 yards.

UCF: Milton, eighth in Heisman Trophy balloting last season, has an abundance of playmakers around him. Nixon and Snelson both had six receptions and eight ball carriers, including Hill, contributed to the Knights rushing for 256 yards.

With a pair of Top 10 teams losing to once-beaten opponents ranked behind UCF, it will be interesting to see where it leaves the Knights in the next poll. No. 5 LSU and No. 7 Oklahoma are certain to slide, while No. 22 Florida and No. 19 Texas will climb after knocking off the Tigers and Sooners, respectively.

UCF: At Memphis next Saturday.