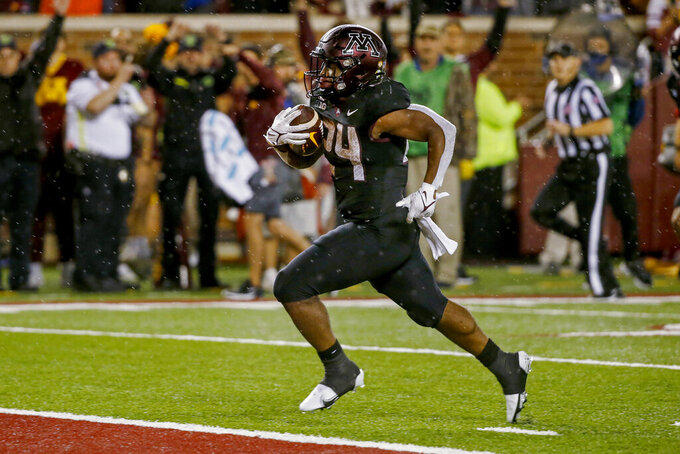 MINNEAPOLIS (AP) — Minnesota has been forced to move forward without star running back Mohamed Ibrahim, trying to fend off those what-could-have-been thoughts that only serve to frustrate and distract.

The good news for the Gophers is they are well-built to keep their productive ground game going.

Their experienced and rugged offensive line remains fully in place, even though Ibrahim — the preseason second team Associated Press All-American and reigning Big Ten Running Back of the Year — underwent season-ending surgery this week on his injured lower left leg. He's also backed up by one of the deepest positions on the roster.

“We have a lot of numbers. It’s just you haven’t seen a lot of them because Mohamed has been so good, right?" coach P.J. Fleck said.

Treyson Potts, Cam Wiley and Bryce Williams will be next in line for carries when Minnesota (0-1) hosts Miami of Ohio (0-1) on Saturday. Potts and Wiley are in their third year, Williams in his fourth.

Ky Thomas, who's in his second season with the program, and Bucky Irving, a true freshman, could also find their way into the mix this year. No matter who's got the ball, he'll have a lot of help finding the holes. The Gophers have one of the oldest offensive lines in the country, thanks to the pandemic-dominated 2020 season the NCAA granted as an extra year of eligibility.

Their top seven players at the position are all in their fourth season or more, and five of them are in at least their fifth. Left guard Conner Olson and left tackle Sam Schlueter are sixth-year fixtures, as is tight end Ko Kieft.

The Gophers led now-third-ranked Ohio State 21-17 in the third quarter largely because of this group and finished with a time-of-possession advantage of 38:41 to 21:19. They used a jumbo personnel package with Kieft plus seven offensive linemen more than once.

“Those guys are incredible, and I think it’d be a waste if we couldn’t get as many of those guys out on the field as possible,” Kieft said. “That’s who we want to be as an offense, just the most physical offensive unit in the country.”

That adjective works fine for Kieft.

“Talking about football in general, it’s kind of something that’s been taken out of the game either through rules or just play style,” Kieft said. “I really try to bring that into my game, especially in run blocking. It’s something that I enjoy, and I think it helps our offense a lot.”

Both Minnesota and Miami faced top 10 opponents in their opener, though only the Gophers were competitive. The Redhawks lost 49-14 to Cincinnati, which moved up to No. 7 in the latest AP poll. The Bearcats had twice as many yards and built a 42-0 lead by early in the fourth quarter.

“There's a razor-thin margin for error, and we didn't execute close to the level to win any game, let alone try to beat a team as talented as Cincinnati," said coach Chuck Martin, who's 32-47 in his sixth season at Miami.

A.J. Mayer made just his second career start quarterback last week for the Redhawks, going 9 for 28 for 109 yards with two sacks. Brett Gabbert, the Mid-American Conference Freshman of the Year in 2019, did not play at Cincinnati due to injuries that limited his training camp. The younger brother of former NFL quarterback Blaine Gabbert is on track to return to the lineup at Minnesota.

The Gophers successfully broke in a new kicker, Matthew Trickett, against Ohio State. The transfer from Kent State made a 46-yard field goal and all four extra points. He's familiar to MAC rival Miami, last seen hitting three of four field goals against the Redhawks on Oct. 26, 2019.

The Gophers pulled out a 41-35 victory in triple overtime on Sept. 8, 2007, the first and only win of coach Tim Brewster’s first season. They also hung on for a 29-23 victory on Sept. 17, 2011, when Miami reached the 20-yard line in the closing minutes but turned the ball over on downs. That was Minnesota’s first win under coach Jerry Kill.