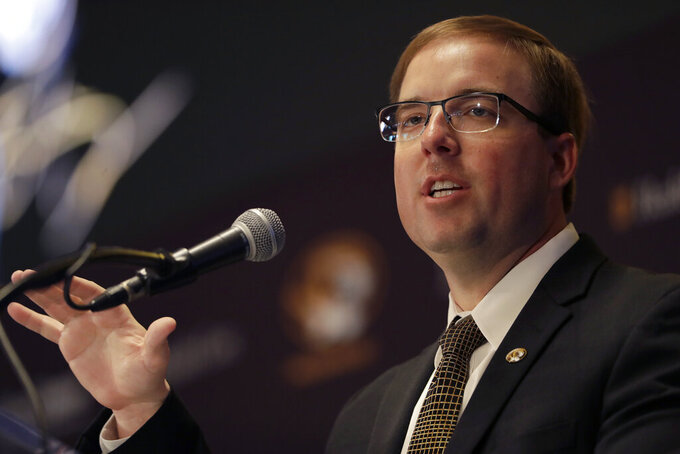 FILE - In this Dec. 10, 2019, file photo, Eliah Drinkwitz is introduced as the new head football coach at the University of Missouri, in Columbia, Mo. Drinkwitz will get a good idea of just how far he has to go in building a "New Zou" when the first-year Missouri coach opens his season against Alabama, thanks to the SEC going to a league-only slate due to the coronavirus pandemic. (AP Photo/Jeff Roberson, File)

COLUMBIA, Mo. (AP) — It won't take long for Eli Drinkwitz to learn just how far he has to go in building a “New Zou."

The new Missouri coach should have had a relatively soft opening game against Central Arkansas on Sept. 5, then three more winnable non-conference games against Eastern Michigan, BYU and Louisiana-Lafayette. But when the pandemic caused the Southeastern Conference to go with a league-only schedule, those four schools were dropped entirely.

“Y'all are trying to get me in trouble,” Drinkwitz said with a grin, when asked about the formula the SEC used to adjust the schedules. “I would just defer to the SEC. I would defer to the league to find out what the formula was or was not. At this point it's sour grapes. They revealed who we're playing and that's who we will play.”

Drinkwitz did acknowledge a recent conference call among SEC coaches got a bit testy. But he also promised that the Tigers will not back down from anybody on the schedule, whether that's an FCS school or the mighty Crimson Tide.

“We made every effort to create a schedule that is as competitive as possible and builds on the existing eight conference games that had already been scheduled for 2020,” SEC commissioner Greg Sankey said in a statement. “This schedule is a one-year anomaly that we have developed under unique circumstances presented by the impact of COVID-19.”

Not just a unique schedule but, at least for Missouri, one of the toughest in college football.

“It's not like any team you got is going to be a bad football team,” Drinkwitz said. “I think the candidness of the conversation was understanding how the teams were divvied out. But put it on the schedule, let's rock and roll.”

That outlook might best sum up the bright, positive approach that Drinkwitz has brought to the Tigers.

The program had reached rare heights under Gary Pinkel, a big reason why it was invited to leave the Big 12 for the SEC. But it grew stagnant — and arguably regressed — under Barry Odom, and that was reflected not just in a declining win total but an increase in empty seats at Faurot Field.

Enter the 37-year-old Drinkwitz, who was given a $24 million, six-year contract in December despite having just one season of head coaching experience. But what a season it was at Appalachian State: He led the team to a 12-1 record with wins over Power Five schools North Carolina and South Carolina, an SEC school, and a victory in the New Orleans Bowl.

Drinkwitz also inherited a loaded team at Appalachian State, though. He takes over a program at Missouri that went 6-6 and failed to reach a bowl game, and that must replace its starting quarterback and plenty of other crucial pieces.

That work was delayed three days into spring football by the coronavirus pandemic. The Tigers also missed the majority of their voluntary summer workouts, putting Drinkwitz in a tough spot when fall camp began in earnest this week.

“I think the assumption with life is if you got a shorter amount of time, you have to speed up the process. But there's no speeding up the process,” he said. “You have to lay the foundation. You can't skip a step. It's like we're putting together a toy, throwing away the directions and getting to the end as fast as you can. If you skip steps you're going to get burned.”

That's why the Tigers spent the first couple of days at practice this week going over fundamentals, time and time again. It got to the point that some players were exhausted by the repetitive nature of the workout, though they also were pleased to simply be back on the field.

“It's very repetitive,” Tigers tight end Daniel Parker Jr. acknowledged, “but it's a lot easier to learn when it's very competitive. ... (Drinkwitz) is a smart coach. He understands the ins and outs of the game. It's just a blessing to have him here.”