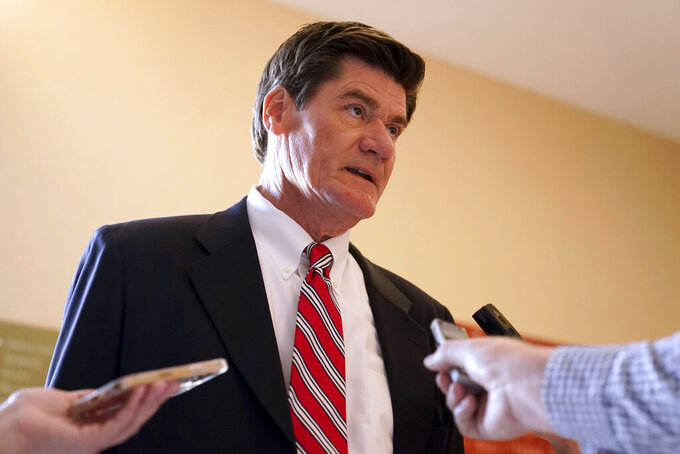 FILE - Craig Thompson, commissioner of the Mountain West Conference, speaks to reporters after the College Football Playoff presidents group meeting Tuesday, June 22, 2021, in Grapevine, Texas. Craig Thompson, the only commissioner the Mountain West Conference has known, is stepping down after nearly 24 years in charge. The league announced Wednesday, Sept. 14, 2022, that Thompson's last day will be Dec. 31.(AP Photo/LM Otero, File)

Craig Thompson, the only commissioner the Mountain West Conference has known, is stepping down after nearly 24 years in charge.

The league announced Wednesday that Thompson's last day will be Dec. 31. He was on board when the conference began operations in January 1999.

With the 66-year-old Thompson at the helm, Mountain West teams took part in five bowl games affiliated with the Bowl Championship Series or College Football Playoff. He also helped bolster the league's portfolio on the football field by adding Boise State — officially joining in 2011 — when Utah left for the Pac-12 and BYU became an independent.

“The entire Mountain West Conference owes a debt of gratitude to Craig for his selfless service over the history of our conference,” said Garnett Stokes, the president at New Mexico and chair of the conference board of directors. “His fingerprints are on every accomplishment and every initiative we have undertaken, and he has positioned the conference to continue to be among the nation’s elite."

When college football went through widespread realignment, Thompson helped the league not only add Boise State but Fresno State and Nevada in 2012, along with Hawaii in a football capacity. A year later, the Mountain West officially brought in San Jose State and Utah State.

In 2020, the league announced a six-year, $270 million media-rights deal with CBS and Fox Sports. The package includes football and men's basketball games being aired, with Fox Sports having rights to the league's championship game.

“Craig has provided important leadership to the MWC since its inception,” said UNLV President Keith Whitfield, who also serves as the vice chair of the conference board of directors. “We are stronger because of his work as we go forward into a quickly changing landscape in the NCAA and the College Football Playoff discussions.”

Thompson said in a statement that his final priority was expansion of the College Football Playoff. A plan was recently announced for the playoffs to include 12 teams, which sets the stage for a multibillion-dollar tournament as soon as the 2024 season.

“I take considerable pride in my committed engagement to this effort over the past two-and-a-half decades and look forward to the finalization of those details in the coming months," Thompson said. "With CFP expansion accomplished and having invested almost a third of my life in the Mountain West, the time is now right for me to conclude my tenure and allow the Conference to continue its momentum under new leadership.”

Before arriving at the Mountain West, Thompson served as the commissioner of the Sun Belt Conference.

Thompson spent 43 years in athletic administration and along the way served on numerous boards, including the CFP management committee. He just finished his second stretch as a member of the NCAA Division I men’s basketball committee.